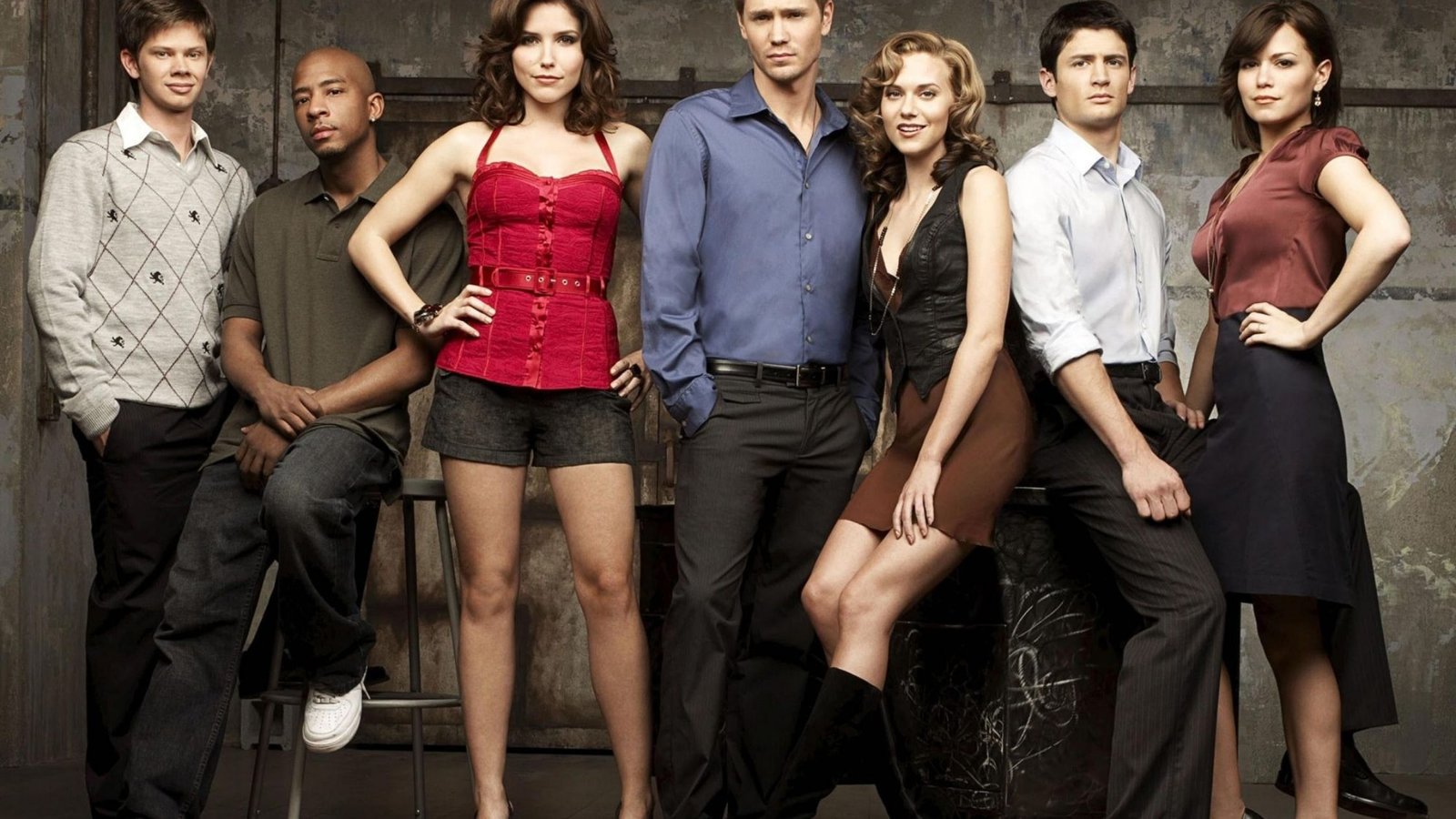 Talking about 13 Shows Like One Tree Hill was a perfect romance and teen drama-based show out there winning millions of hearts worldwide. This TV series was produced by rolling/Robbins productions, Warner Bros television, and mastermind laboratories. It had a total of 187 episodes aired from September 23, 2003, to April 4, 2012, on the WB and the CW. It had a running time of 42 minutes for each episode.

The story of the series begins as two half-brothers named Lucas and Nathan Scott became enemies as Lucas became a member of the tree hill Ravens ( the high school basketball team) while Nathan was already head of the team and was threatened by him. The stories have different characters and sweet and sour relationships between them.

This show was so popular among the viewers that they started seeking shows having a similar theme as the series. So here are 13 Shows Like One Tree Hill given below.

It is an American teen drama, soap opera, romance, and adolescence series produced by Columbia Tristar domestic television and others. It was aired from January 20, 1998, to May 14, 2003, on the WB with a total run of 128 episodes and 6 seasons. Each episode had a running time of 45 minutes.

The story of the series revolves around a group of friends reading in high school and their journey to college with a lot of drama, adventures, romance, fights, and sweet and sour relationships between them.

It is an American comedy-drama, slice of life, and coming of age TV series produced by the Black Marlens company and New world television and was aired from January 31, 1988, to May 12, 1993, on ABC with a total run of 115 episodes and 6 seasons. Each episode had a running time of about 22 to 24 minutes.

The story of the series revolves around the life of Kelvin Arnold, a boy aged 12 years, and his journey till he becomes 17 years old. His father works in the management sector at NORCOM as a defense contractor while his mother is a housewife. He has one older brother Wayne and an older sister Karen and also has two friends and neighbors whom you can find persistent throughout the whole series.

MUST-READ| 8 Shows Like Suits To Watch If You Really Love The Show!

It is an American teen drama produced by Warner Bros Television, alloy entertainment, and others. It was aired from September 19, 2007, to December 17, 2012, on the CW network and had a run of the total of 121 episodes and 6 seasons with a running time of each episode being 39 to 44 minutes.

The story of the series revolves around the privileged rich class adolescents living in Manhattan’s Upper Eastside (UES). The main featuring throughout the whole series was of the girls and their friendship, team spirit, fights, and a lot more. The series does also have boys adolescents as in main lead too and is definitely a perfect package of complicated life and encounters of teens.

It is an American drama, fantasy, and supernatural fiction series produced by poppy productions, reveal entertainment, and others. It was aired from October 14, 2018, till the present date and had a total run of 59 episodes with 3 seasons.

The story of the series begins with the two sisters Maggie vera and Mel whose mother was killed by an unknown dark force. The sister discovers that they have an older half-sister too who is doing a job in the local university. They start to discover new magical abilities in their living area and soon uses them to protect the lives of other people from demons and other evil forces.

It is an American sports drama, teen drama, and family drama TV series produced by universal television, imagine television and film 44. It was aired from October 3, 2006, to February 9, 2011, on NBC and the 101 networks. It had a total of 76 episodes with 5 seasons and the running time of each was about 43 minutes.

The story of the series is about a fictional town of Dillon, Texas where a football team named panthers is featured with its head coach Eric Taylor and a business tycoon buddy Garrity who is a football booster for the team. It also shows a lot of scenes about the families of the players and coaches too and throughout the whole series, we can see the beautiful coordination of team members, regardless of some ideological differences and family tensions they are facing.

MUST-READ| 5 Shows Like Love Death And Robots You Should Watch!

It is an American action, police procedural, and crime drama TV series produced by wolf films, wolf entertainment, and universal television. It was aired from January 8, 2014, till the present with over 164 episodes and 8 seasons. Each episode had a running time of 42 minutes.

The story of the series is shown about a fictional 21st district that houses the officers of the department of elite intelligence unit and patrolling officers too, which is led by detective sergeant Hank Voight. The first half of the whole series focuses on patrol and intelligence officers and the rest half focuses on the advancement of office per Kevin Atwater and officer Kim Burgess to the intelligence unit. This series was truly successful in showing the perfect combination of criminal dramatic sceneries and actions too.

It is an American teen drama and mystery TV series produced by Berlanti productions, Archie comics Warner Bros Television and CBS studios. It was aired from January 26, 2017, to the present date with over 90 episodes and 5 seasons. Each episode had a running time of 42 minutes non-an average.

The series focuses on the Life of the lead Archie Andrew, who lives in the small town of Riverdale and as the series continues, he begins to explore a dark side of his perfect image there. This series is perfect for those wanting a touch of teen life and their indulgence in dark activities.

It is an American teen drama and soap opera series produced by propaganda films, spelling entertainment, spelling television, and titans productions. It was aired from October 4, 1990, to May 17, 2000, on fox network with a total run of 293 episodes and 10 seasons. Each episode had a running time of 45 to 50 minutes.

The story of the series is about the Walsh family – Jim, Cindy, Brandon, and Brenda, who have recently moved from Minneapolis, Minnesota to Beverly Hills, California due to the promotion of Jim. Brenda and Brandon join west Beverly Hills High school where they made friends with several classmates and throughout the series, we can find a lot of adventures, encounters, and the life they were experiencing with their wealthy peers.

It is an American teen drama TV series produced by college hill pictures inc. , wonderland sound and vision and others. It was aired from August 5, 2003, to February 22, 2007, on the Fox network. It had a total run of 92 episodes and 4 seasons. Each episode had a running time of 42 minutes.

The story of the series goes on as a boy named Ryan Atwood moved with Sandy and Kristen Cohen who takes him when his mother kicks him out of the home. The main theme of the story is the cultural shock he got when he moved from a life of poverty and domestic abuse to high-class and superficial society. He also had feelings for Marissa Cooper. Overall, it was a great series to be watched by the viewers, who are seeking a series casting a theme of the sudden change of life in a character.

It is an American crime thriller, mystery, and teen drama TV series produced by Warner Horizon Television, Alloy entertainment, and others. It was aired from June 8, 2010, to June 27, 2017, on a freeform network. It had a total run of 160 episodes and 7 seasons with the running time of each episode being 41 to 45 minutes.

The story is about five high school girls: Spencer Hastings, Alison dilaurentis, Aria Montgomery, Hanna Marin, and Emily field. The leader Alison goes missing and the group falls apart, one year later, they are reunited and begin to receive messages from a suspicious and mysterious identity named “A”. It threatens and tortures about lies they made before and after the death of Alison herself, but soon the assumption proves to be wrong after the body of Alison was found. They concluded that someone wants to take revenge for her death.

It is an American teen drama TV series produced by brand vision, prodco original, and American teenager inc. It was aired from July 1, 2008, to June 3, 2013, on ABS family and had a total run of 121 episodes and 5 seasons with a total running time, not each episode being 45 minutes.

The story begins as 15 years old girl Amy Juergens finds out that she has got pregnant after fooling around with a handsome boy, Ricky Underwood, for whom she had a crush. She hides this fact from her two best friends Lauren and Madison. Then the story gets complicated after she also had a crush on another boy while she was pregnant and starts dating her too. There are a lot of secrets in the story to be revealed and one of the episodes shows her mother being pregnant too.

This is the second last show of 13 Shows Like One Tree Hill, and Parenthood is an American family drama, serial drama, and dramedy TV series produced by true jack production, imagine television, and others. It was aired from March 2, 2010, to January 29, 2015, on NBC. It had a run of a total of 103 episodes and 6 seasons. With a running time of each episode of about 43 minutes.

This series is all about the three generations of the Braverman family: Adam and her wife Kristina had two children, teenage haddie and eight years old max. Max is diagnosed with Asperger’s. The family had a lot of fun together and faced every problem all along, adding family values to the viewers and fans of the show.

Here we are Talking about the Last Series of Shows like one Tree Hill. It is an American sitcom TV series produced by Michael Jacobs Productions and touchstone television. It was aired from September 24, 1993, to may 5,2000 on ABC.

The first season of the show begins with a boy named Cory Mathews and his best friend Shawn hunter who are two average 6th grader students. They don’t really consider doing their homework despite the efforts made by George teeny, who is their teacher. Their main interest is in sports and their life is really worth watching and is really a fabulous feast for the viewers.