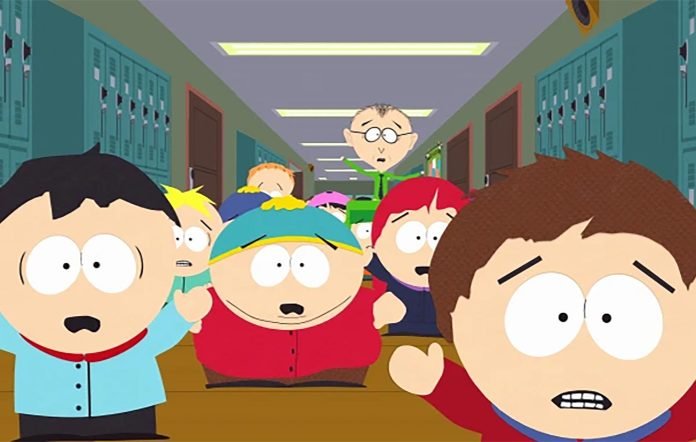 I know and I am aware of how you love anime and manga. But tell me honestly how many of you are into animation? And when I say animation let me tell you no, it is not only for kids. The storyline and the graphics are really interesting and eye-soothing after a constant watch of web series and movies. Let us know your thoughts. We will be waiting for you to tell us, any day!

Now again coming back before I get lost into this and that. South Park is an animated sitcom by Trey Parker and Matt Stone. The Us sitcom has a total of 314 episodes. The runtime of each episode is 22 mins. The animation runs for 25+ seasons.

The Black comedy Satire animation scored a rating of 8.8 from IMDb and 4.7 from the audience out of 5. I will again say, that this is a must-watch animation for all.

Now I will tell you in short about the story so that you have a brief idea.

This is the story of four foul-mouthed friends who come together. They are KLyle, Eric, Kenny, and Stan. They go for some bizarre wild adventures, involving both man and supernatural beings.

Each episode opens with a disclaimer and features slapstick-style humor.

Distributed by Paramount Networks, you can watch the animation on Paramount itself and also on Netflix, Amazon Prime, and Now Tv.

Watch the grade-schoolers adventures in the dysfunctional but quiet town and laugh to your fill.

Are you ready? Cause I am. Then let’s begin!

The 2014 animation completed its full release by 2020 with 77 episodes and 6 seasons in total. Running for 25 mins each the show is available for your watch on Netflix. Rated 8.8 by IMDb, 93% rating from Rotten Tomatoes, and with an audience upvote of 4.9 out of 5. I will simply say, don’t miss it guys.

The animated comedy tells us about a horse who lived by being the star of a Hit Tv show. He was making quite a name in the ’80s and in the 90s’. But now living in Hollywood he is complaining about anything and everything while he is also seen wearing colorful sweaters.

This show is currently on air, it made its debut back in 2018. The crime-action dark comedy sitcom has a total of 3 seasons with 30 episodes as of now. Running for 23 to 30 mins each, the animation is rated 6.9 by IMDb and 40% by Rotten Tomatoes. You can run the show on Netflix.

Now, the plot. This is a series about the bad cops. Like they are not evil but they lack the power to perform well. Similarly, they are very bad at responding as well. They can be called the worst responders ever.

This is one of the most-watched and most loved animations of all time. It won the hearts of the fans as well as the critics. Rated 7.7 by IMDb and 77% by Rotten Tomatoes; the anime really deserves a watch now or even if not now then at least add it to your watchlist.

The 2021 anime is still on the air. Season 1 has complete episodes and the rest is still on its way. A total of 10 episodes are available now on Netflix and Funimation runs for 26 to 31 mins each.

The paranoid science fiction shows us a guy called Ridley who is a genius although he is also anti-social by nature. She and her team work together to hide the darker conspiracies that the world has.

This is also a Netflix original series but you will find it available on HBO Max as well. With a 100% rating from Rotten Tomatoes and 7.9 from IMDb, the 2021 show is currently on air.

To date it has 16 episodes and 2 seasons, the 3rd one is soon to come. The short animation drama runs for 23 mins each.

The show highlights the troubles faced by a married couple when they are in the transition from their 20s to their 30s. Raising their daughter on one hand while coping with the living arrangement of a divorced couple on the other.

This animation as well is currently on air. The anime is dated back from 2018 and with a total of 40 episodes and 4 seasons, this is a must-watch folk.

The runtime of each is 12 to 36 mins. Created by Matt Groening the fantasy adventurous sitcom is there on Netflix. The anime received a score of 7.2 from IMDb, 4.7 out of 5 by the audience, and 61% by Rotten Tomatoes.

Meet our badass Princess, Princess Bean who is not ready to accept her marriage with a prince. Explore the life of Bean who is carefree towards her life, a drunkard, alcoholic, and very rebellious.

Watch the show on Netflix and Prime.

This is a US adult sitcom that you can find on Netflix. Rated a 6 by IMDb and 14% by Rotten Tomatoes, the animated comedy will fill your belly with laughter. The 2020 anime has 10 episodes and has a runtime of 23 to 26 mins each.

The anime features a hot-headed basketball coach. He is a very foul-mouthed guy who leads the high school, basketball kids. Now with a terrible team of players at his side, will he be able to make it to the leagues? Watch the show now!

Also, a Netflix original series but is there on Adult Swim as well. The surreal humor slice of life comedy animation premiered in 2019 and completed its air by 2021. It has a total of 20 episodes and runs for 26 mins each.

I will not go much deeper into the story and spoil the mood. But I will tell you that this is the story of two bird ladies who live in the same apartment.

The animation scored a rating of 7.3 from IMDb and 99% from Rotten Tomatoes.

IMDb has rated the show 8 and 99% from Rotten Tomatoes. The series has 5 seasons in total and a spinoff is set and will premiere in March 2022. The animation has 51 episodes in total and runs for 25 to 46 mins.

Watch the teenagers’ friends when they come together, they find their horrors and fun of puberty. As they find themselves and rediscover the youth in them.

You will find the show on Netflix.

Another Netflix original animation premiered in 2015 and completed its air in 2021. The animation comedy has 5 seasons and each runs for 30 mins with 44 episodes in total. The black comedy satire has dark comedy in it but the story is a must-watch for all lovers of humor.

The story follows the life of the Murphy family back in the 90s. The time when there was no stress and tension. Kids were wild, alcohol poured like rain and nothing stopped from sitting in front of his TV.

The animation is rated 93% by the audience and it also received a rating of 8 from IMDb.

The ongoing show premiered in 2020 and is there on Netflix. With the current 1 season with 8 episodes in total, the series runs for 23 mins each. Rated 8.2 by IMDb and 91% by Rotten Tomatoes, the animation has dark comedy and adventures as its genre.

The story tells us about a space casters tipsy world. Inside his stimulator, he questions life, death, and the very existence.

READ ALSO | 12 Shows Like Grace and Frankie You Need To Watch!

Another ongoing show premiered in 2021. The show is available on Hulu and Disney Hotstar. The animation has 10 episodes in the total running for 22 mins each.

The animation features a ghost of an assassin who’s an American and a snow monkey. The duo gets cut down in the ghost world.

The animation is rated 7.9 by IMDb and 80% by Rotten Tomatoes.

A vampire hunter is on a mission to save the city from the hands of the vampires and otherworldly creatures controlled by none other than Dracula.

The animation is rated 8.3 by IMDb and 94% by Rotten Tomatoes.

You can watch the show on Netflix.

Well, that’s it, guys! Watch the shoes and enjoy the story while we get back again ASAP with new updates. You will find the trailer to the respective shows on the platforms only also available on YouTube.

Have a good time and watch. Before I take my leave.