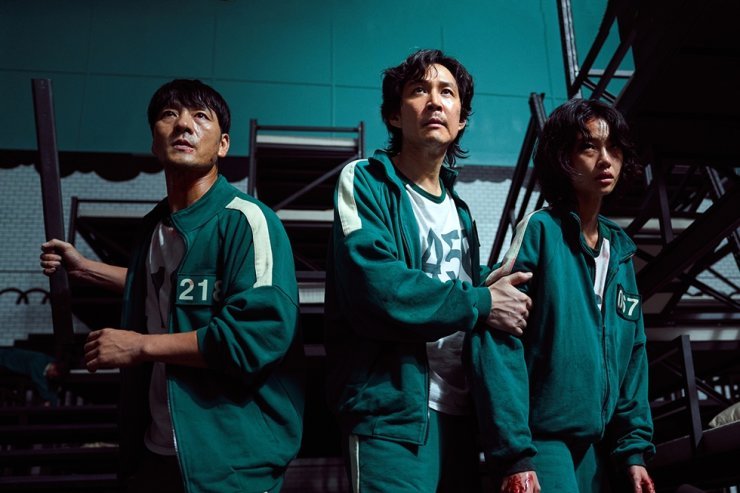 We have all seen famous TV shows where a group of famous people are made to live on an island or in a home together cut from connections from outer world, fighting every day and everyone for survival. It can be through games or fights or maintaining basic friendships with people and realizing who is the real deal while who is using you as just a stepping stone.

Based on these things Netflix has launched a South Korean television series for us called Squid Game. This series is about people from different parts of the country coming together and how they have one thing in common, desperation for money and it brings them together to fight against all the odds.

The premise of the show is that all people have to play games based on survival and keep winning to go till the end. The games are not simple ones. Instead, they are twisted cruel ones that really make on gasp for air just watching. It is a thrilling and adventurous show and we really hope no one picks one favorite character as you never know what shall happen and when.

The show is produced by Hwang Dong Hyuk who is also the writer of the show. Netflix announced about the release of this South Korean survival drama in September 2019. Initially this series was named Round Six but later own was renamed as Squid Game. Squid game is actually a popular Korean game for children from the 70s.

Till now 9 episodes have been made and all the episodes were released on the same day- 17th September 2021. Ever since the show ended people have been searching online looking to see for any announcement made regarding the same.

So, if you are one of those people too who loved the thrill and want to see more of it, read along and discover all we have collected for you.

The series Squid game has a total of 9 episodes and all of them were launched together on 17th September itself. In the story a total of 456 people were registered to fight for a game considering 6 rounds each more daunting than the one before. These games look like fun children’s game but to make it a survival drama they have added a few dark life risking twists thus instilling a fear in the heart of players.

Many even want to quit but it is the substantial cash price that makes them go ahead. The game has a cash price of 38.7 million US dollars. Everyone who has come here is not for the fun of it but because they are desperate to win the money because if they leave the game to save their life the things outside shall kill them. Thus, all they are trying to do is to solve and win one day at a time. There is no space for friendships or affection as much bigger things like life or death are at stake.

Will There Ever Be Squid Game Season 2?

This is the reason why the series is loved so much even though it has been only a few days since its release. It is a series that is thrilling and adventurous and keeps you hooked. Well, not hooked for long as there is just one season with only 9 episodes. Ever since the nine episodes ended people have been searching for further story or any hints about another season.

As we all know Netflix is not one of those that shall let a stranger or creator hint to a renewal It shall make the announcement itself but after all the due consideration is made and the response of the series is carefully gauged hence, we might have to wait for a while. As of now no such announcement has been made. But as per the end of the ninth season it is safe to say that there is a positive possibility of another season. The response has been great and the views as well.

Yes, some might say that the game has ended by the last episode hence chances are slim but, in the end, we also see that the winner Gi-hun is now set on a different path. He wants to know was the one who started it all and created this game. So, looks like there is still plenty to find and have a story about.

So, let’s stay positive because we all know that a silence from network is not necessarily a NO. It can also be YES and Netflix might come up with an even better story to share with us.