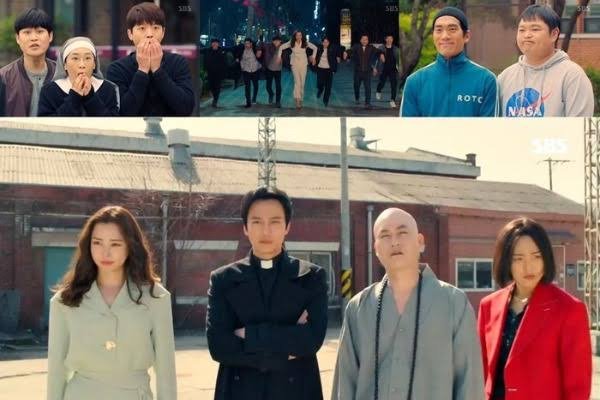 If you follow Korean television closely you have definitely heard of The Fiery Priest. It has gained huge popularity and love from the audience. After a hilarious and amazing season one, fans are waiting for the next season. They want to see their favorite characters on the tv again.

This popular comedy crime drama series follows the life of Kim Hae-il. A priest with anger management issues trying to solve the death of his beloved mentor and teacher. The series has been written by Park Jae-bum and directed by Myoungwoo Lee. Season one came out in 2019. Since then fans have been eagerly waiting for a new season.

The fans are waiting eagerly for the second season of this hilarious show. However, they have to stay guessing for a bit longer. There hasn’t been any official release date yet for the new season. There has been some talk that filming for season 2 of The Fiery Priest is underway. This means that we can expect a new season by the end of 2022 or sometime in early 2023.

Unfortunately, for fans, the plot of the second season has not been revealed by the creators yet. We can expect the story to follow on the same lines as season one.

Kim Hae-il trying to control his anger as a priest while looking for Father Lee’s killers. We may see a new storyline with more twists and turns. But currently, nothing is known for sure.

The awesomeness of the show is credited to its absolutely genius characters. We all love them. And in season 2 it is expected that the old cast members will reprise their roles.

Kim Nam-Gil in the role of Kim Hae-il or Michael Kim. And Moon Woo-jin plays the younger version of Hae-il. Micheal Kim is our favorite angry priest.

He was a NIS Agent who retired after facing an accident in his last mission. Having met Father Lee, he is now on a journey to become a priest. However, he has some serious anger management issues and he throws around fits angrily very often.

Then comes Goo Dae-young. A clumsy detective who is always overshadowed and pushed over by his seniors. Kim Sung-Kyun does an excellent job portraying this character.

Lee Hanee plays Park Kyung-sun. A corrupt prosecutor with an interest in Hae-il for his good looks. They are constantly bickering over something or the other.

The story needs a villain. And so comes Hwang Cheol-bum. Go Jun plays the role of this corrupt businessman. He also happens to be the step-brother of Gudam’s Head of Borough. He is known for his violence and cruelty. Thus he was ranked number two gangster in Yeosu.

Then there is Seo Seung-ah. Portrayed by the very beautiful Keum Sae-rok.

Seo Seung-ah is a rookie detective at Gudam Police Station. She also has a crush on Hae-il. And they often work together to reveal the truth behind Priest Lee’s death.

Where To Watch The Fiery Priest Season 2?

The popularity of the show has no doubt reached immense heights. People love to watch this show because of the humorous way it depicts the whole story. Fans can now watch the first season online on Netflix and Amazon Prime. Season 2 hasn’t been released yet. But it can be expected that like season one, it will be released on SBS on Fridays and Saturdays.

We got a very eventful ending to the season. The last two episodes were cliffhanging and nail-bitingly good. We also got an action-packed scene with Kim Hae-il fighting agent Lee. Agent Lee even brings Sister Kim with him as leverage. But a fight ensues between the two and ultimately Kim Hae-il manages to subdue Agent Lee. He also gets pretty seriously beaten up in the process. But ultimately it is over. Kim Hae-il faces his demons and overcomes them. The ending is hilarious. We see Hae-il, Kyung-seon,

Seung-ah and Dae-young assembled outside a warehouse. They are all dressed up and ready to take on a warehouse full of thugs. But in the ending scene, we see them running away from a group of thugs. A very hilarious way to end season one.