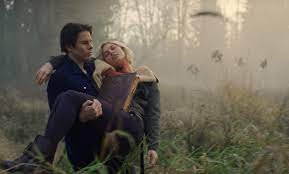 If you are someone who likes to watch supernatural dramas with a little touch of dark comedy and horror, you would have probably heard or already watched the Netflix original series called “The Order”. Created by Dennis Heaton “The Order” is a Canadian- American horror drama television series produced by Petros Danabassis, Jay Daniel Beechinor, Morris Chapdelaine, Justis Greene, Todd Giroux. The series is based on characters developed by Heaton, Shelley Eriksen, Rachel Langer, Jennica Harper, Penny Gummerson, and Jason Filiatrault. The show is available on Netflix for worldwide streaming. The first and second season has 10 episodes each with 42- 50 minutes. The show is about a horrifying journey to uncover the truth of oneself.

The first season received a lot of positive reviews from viewers. It has managed to get 6.8 ratings on IMDB and 100% ratings on Rotten Tomatoes. The show had gained worldwide attention in very little time. It has that capacity that makes the audience sit for hours to binge-watch it. The plot is something which makes it very entertaining and exciting, according to the fans.

ALSO READ: Bloom Into You Season 2 Release Date And Spoilers!

The first season premiered on March 7, 2019, and in the same month, it was renewed for a second season. The season aired on Netflix on June 18, 2020. In November 2020, it was announced that the show was canceled after two successful seasons. The makers of the show officially announced that there would not be season 3 of the on its official Twitter page. In this tweet, Chad Oakes, the director of the movie said thanks to all those who made their contribution in the making of this amazing show and to those who watched this show to make it a bigger success. He, further, added that this journey was incredible and one of the memorable and best experiences of his career.

Jake Manley portrayed Jack Morton who is a student of Belgrave University. Srah Grey played Alyssa Drake who is a college student and university tour guide. Then we have Matt Frewer as Pete Pops Morton (in season 1). He is Jack’s grandfather. Katharine Isabelle and Sam Trammel were playing the roles of Vera and Eric Clarke respectively. Nicole Birch played the role of Anesha bailey. If the show was renewed for the next season, it was expected to see these familiar faces and, maybe, more new faces. The show had many guest stars too such as Dylan Playfair, Hiro Kanagawa, Ty Wood, Ajay Friese, Drew Tanner, Andres Collantes Ian Tracey, and many more.

The Order revolves around a college student of Belgrave University who joins the Hermetic Order of blue Rose to avenge his mother’s death. It is a secret society that teaches about magical powers and makes people practice that. However, it changed Jack’s life as deeper he learns about society reveals Jack about his dark family secret. He became aware of the underground battle between werewolves and the magical powers. By the end of the first season, he is himself a werewolf.

Season 3 was expected to answer some biggest questions that were left in season 2. We would know what happened to Alyssa? It would be interesting to know how Veera survive without her magical powers. In his tweet, he also shared his plans for season 3. He said that Jack would raise Alyssa from the dead although his plan would fail. She would most likely be possessed by Zecchini. Not only, Alyssa, but makers were also planning to rise a bunch of other corpses too. A fan asked him about Veera. To this, he replied that she would get her magical powers back after a while.

Since season 3 is already canceled, there is no trailer of season 3 released by Netflix. We don’t know if this is going to happen but fans are hoping to hear good news from the makers soon. Seeing the show’s popularity, there is always a chance that someone could be interested in bringing the show again. It’s such a shame for Netflix to cancel The Order Season 3 before it can do something big.