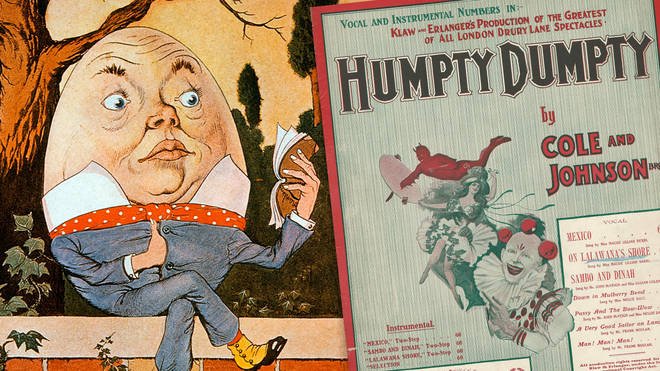 “Childhood” this one word has given tons of unforgettable memories that have been pierced in our minds and hearts forever. Or in other words, our childhood is the holder of our growth, tears, happiness, and all the silly things we have done, it has captured every little step we have taken and all the mistakes we have made.

Childhood is a different phase that we experience once in our lives and it is also a phase that just starts from the beginning of our lives. We have gained so many beautiful memories in our childhood and learned many things when we were kids.

There are many cartoons that made our childhood better, there are also many rhymes and poems that we used to learn a lot when we were kids and Humpty Dumpty is one of them. I still remember the cute yet funny lines of the poem and the way I used to get a big smile on my face while reciting the lines “Humpty Dumpty sat on the wall, Humpty Dumpty had a great fall..” it is impossible for you not to smile while reading these lines, right?

Everything that we witnessed in our childhood will always remain close to us but what if our childhood got ruined by learning the origin or dark story behind our favorite cartoon or nursery rhymes? Don’t get puzzled after reading all these, let me give you a clear statement.

Lately, many people are very curious to know the origin of the nursery rhyme “Humpty Dumpty ” and what it is exactly based on. If you are here for the same thing then keep on scrolling down to learn the secret behind your favorite rhyme of your childhood time.

The Real Story Behind Humpty Dumpty and what was his Origin?

Humpty Dumpty is an iconic nursery rhyme that plays a very vital role in every child’s life. This popular poem is very well known among people all over the world and it is impossible for a kid not to recognize this poem even when we reach adulthood we still can’t help ourselves and always end up jamming to “Humpty Dumpty”.

If you want to know the origin of the poem then it would be hard for you to learn a particular answer because there is no particular information about who actually created this poem. This ancient poem has been existing since the 16th or 18th century and there is no official record of the creator of this poem. According to the sources, the lyrics of the poem used to be different from the ones we learned. We have learned the modified version, before the 18th century; the lyrics of the poem were different.

READ MORE: Who is Near in Death Note?

What is Humpty Dumpty?

But we have also noticed that the poem has mentioned “King’s horses and King’s men ” which also indicates that maybe Humpty Dumpty was a king who was trying to run away from the palace. There are many theories about Humpty Dumpty but nothing feels set in the right piece of the poem.

This poem is indeed very popular. It is not only popular among kids but it is also popular among parents. This nursery rhyme is worldwide popular and every country is well aware of this poem.

What role does Humpty Dumpty play in our Childhood?

It played a vital role, we learned every bit of this poem, and we recited each line till we memorized the whole poem. As a kid who has memorized this poem to recite in front of the whole class, I can say that Humpty Dumpty played an important role in building my confidence.

Yes, this poem is still popular and it has been taught by teachers at Nursery Schools or kindergartens.

Why is Humpty Dumpty popular among children?

Humpty Dumpty is a Nursery rhyme so it is evident to say that it is popular among the kids as it is the very first poem that is taught in the school by the teachers.

READ MORE: How Will Attack On Titan Manga End?