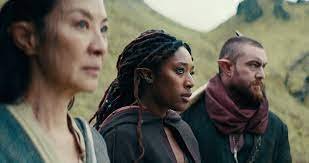 The Witcher: Blood Origin is a fantasy fiction miniseries, the concept of which has been adopted from the series, The Witcher and is a prequel to it. It was created by Declan de Barra and Lauren Schmidt Hissrich. The Witcher has already made its place in people’s hearts. The storyline, the characters, the setting, the visuals,  everything of The Witcher has been up to the mark. Now, the same is being expected from its prequel.

What will this prequel look like? How many episodes will it have? Is it going to have more seasons? What are the characters that we are going to witness in this prequel? Will there be some new characters? There must be a plethora of questions hovering in your mind right?

Well, you don’t need to worry because we are going to solve many of your queries. Continue reading further because we are about to discuss a lot of things regarding this prequel and let you have the answers to all the questions that you have in your mind.

For the fans of The Witcher, we have some very exciting and important news.

First of all, The Witcher: Blood Origin will be a limited series. It won’t be a very long one. This means that there will be no sequels coming up. This will be the first and final season.

Secondly, and most importantly, the series is going to be released on December 25th, 2022. The series will have four episodes. This means that it will be a very short one and you won’t have to spend much of your time watching the series, nor will your curiosity be on the rise at the end of the season because this is a limited series. So the fans do not have to wait for a very long time to finally be able to watch this series.

Let’s now look at the cast of this series.

Sophia Brown is playing the role of Éile. She is a warrior of the Queen’s guard who leaves so that she can become a traveling musician. Laurence O’Fuarain is in the series as Fjall. He is a man who was born into a clan of warriors sworn to protect a king. He instead sets out in need of vengeance. Michelle Yeoh is in the role of Scian who is the last member of a nomadic tribe of sword-elves. They are on a mission to retrieve a blade stolen from her people.

Lenny Henry is playing the character of Chief Druid Balor.

Where to Watch The Witcher: Blood Origin Online?

To those who don’t know where they can watch this series, we are here to help.

The two seasons of the Witcher are available on Netflix. Therefore The Witcher: Blood Origin will also be available on the same platform. The viewers will therefore have to have access to this OTT platform to watch this amazing series.