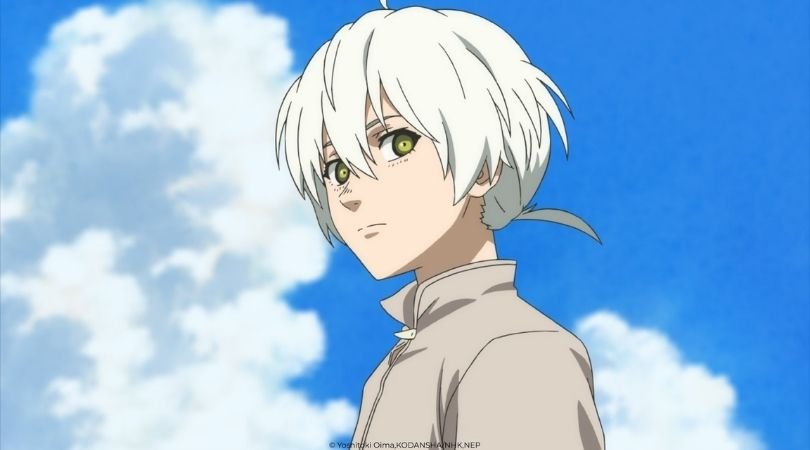 A soul touching anime which tells the story of a journey so unique that it can change the perspective or more like it can augment the perspective of the viewer. It magnificently portrays a journey where a hollow shell like creature went from being devoid of any mental awareness to a creature with deep feelings filled up with different emotions, experiences, trauma, love etc. The colours of life, sometimes dark and soul tearing sometimes bright and heartwarming all are shown vividly in the show.

Fushi started out as a white orb which indicates the hollow it was initially but by the time it’s journey came to it’s end, Fushi was drenched with all sorts of colours, colours that indicates the different shades of the life it had lead, different stories it became a part of, memories it has to cherish, pain it had to endure.

The show tells us that we are not what we claim to be, but we are what the world around us perceives us as. Fushi one day was wolf, one day a lifeless stone, one day a young boy, even though it was Fushi all along but his existence is only as far as he is observed by his surrounding and how he is remembered by the people he got involved with. The title of the anime To Your Eternity sits perfectly with the plot because it’s not about Fushi living a long life, living through different era and among different people. It’s about the memories he has left others with, the place it made in other’s people life, the emotions he has gained, the excruciating pain he has known.

It’s these feelings and memories that are e and no matter what form Fushi took while being involved with anyone, to them Fushi will always be a part of their story, and live on in the memories which might seem to have lost but the world shall remain a witness of the stories that is written from the ink of different colours of Fushi’s life, the stories that will remain intact for eternity.

Here are all the details we know about To Your Eternity Season 2 Release Date.

To Your Eternity Season 2 Release Date

As of now there is no To Your Eternity Season 2 Release Date.

MUST-READ| Fire Force Season 3 Release Date And What Else To Expect?

To Your Eternity Season 2 Story

The plot follows the unique journey of a mysterious divine orb like creature. Initially it appeared as a white orb and was sent to Earth from a foreign world. The creature lacks awareness or any kinds at the initial stage and appears as a non living being. It has the ability to transform itself into anything whose reflection it can get. So when it reached Earth it took the form of a rock.

And not only the physical form, it also resembled the form existence. Later, he takes the form of a moss to grow to stand accordingly to the surrounding environment. Thus, it remained an unconscious being, a being with no mental or psychological existence until it came across a wounded wolf on a snowy day. Even though it caught only a slight glimpse of the wolf, the creature was able to transform itself into the wolf which allowed it to have consciousness and awareness regarding it’s surrounding for the first time. However, having newly gained consciousness it had no clue as to what to do, or where to go so it was just wandering off without any specific path in it’s head. While wandering, it comes across a boy who seemed lonely.

The boy is then revealed to be the owner of the wolf. The same wolf the creature has taken the form of and the name of pet wolf was Joaan. The boy has abandoned his home and is on his journey to find his tribe. He is determined to so and holds confident that he won’t give up. But unfortunately, the boy gets infected and meets his end before reaching his goal.

The creature takes up the form of the boy and heads south. The creature later gets the name Fushi. Fushi’s journey in the world of human society begins from the moment it took up the form of the boy. He visits various places, meets a lot of people, even takes up various form. The plot then observes the journey of Fushi, as it navigates through the path of life through years, decades and centuries. Since it was once a lifeless being, initially even after taking up human form it remained somewhat emotionless.

But as he spend more time surrounded by more people he gradually grew a personality, emotions as he explored the complexities and issues that surrounds the life of humans of different place and heritage. As he encounters all the aspects of humans from love, light, warmth, passion to hatred, grim darkness, sorrow Fushi gets matured. At some point after losing people he created a bond he remained distant from any kind of interaction with humans. Fushi, once a lifeless form of being experienced all aspect of human life for itself from being a kid, to a grown up middle age person to an old person and got the flavour of almost all sides of a human being and probably got a deeper taste than an average human despite being a non-human. From heartwarming moments to heart tearing tragedy Fushi has been through that all.

To Your Eternity Season 2 Characters

Fushi- The role of Fushi is carried on by Reiji Kawashima. He is a newcomer to the seiyuu industry with only 3 roles so far, but fans are saying that he has the capacity to make it big in the industry. He is from Aichi Prefecture and was born in Nov 30, 1995.

The anime is available on Crunchy roll to watch.