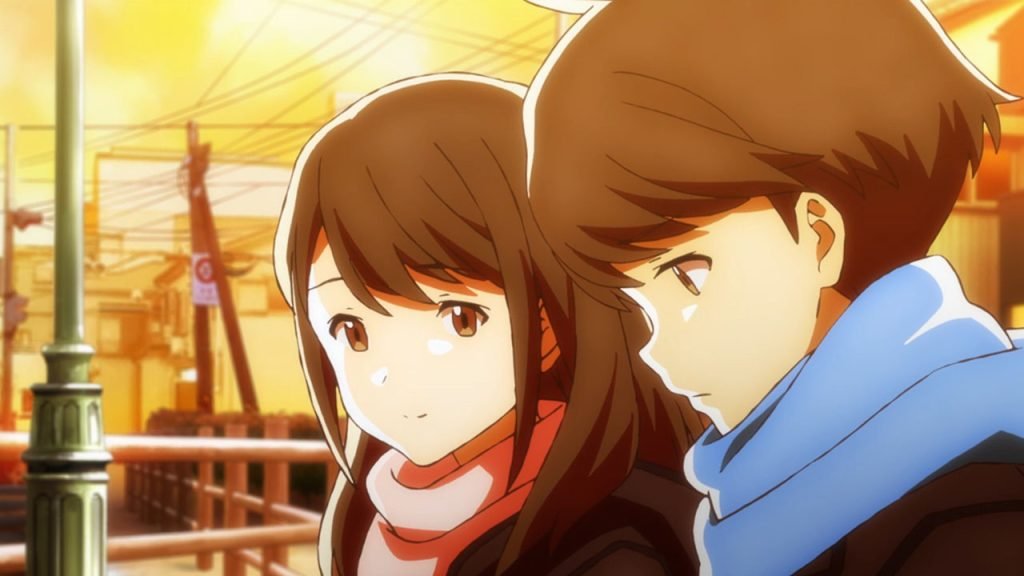 Ah, the promises young love brings! It’s exciting, beautiful, and full of butterflies in the stomach. Which is what makes a high school romance so memorable. Because no matter how many times you fall in love later in your life, that first experience will always be the most special. And the anime ‘Tsuki ga Kirei’ focuses on just that. It follows the story of Kotaro Azumi and Akane Mizuno who tread the shy but thrilling seas of their first romance. Their story is simply heart-warming to watch so it was no doubt that it quickly gained fame and praise from all romance anime fans.
So now, after almost four years of its first season’s release, we are all very eager to know when we can expect Kotaro and Akane back on screen!

The first season’s finale episode left us in bittersweet spirits. The end of high school meant change for our favorite couple, Akane and Kotaro. Gone was the nostalgia of how these two began chatting and how their story progressed and a flurry of confusion took its place instead! What was going to happen to them next?

We hoped to find it out soon enough with the arrival of the next season but it was not to be! Season 1 ended in 2017 and since then, there has been no news regarding the release of the second season. Despite its fantastic debut and positive responses, the producers are silent a grave about whether the series will return or not. So for now, sadly nothing can be said about its release date.

MUST-READ| If It’s For My Daughter Season 2 Release Date: Is The Show Announced?

Now, now! Hold your horses for a moment. Before we jump into the predictions for the second season, let’s refresh our memories a little bit, shall we?

The very first time Kotaro and Akane met was at a dinner. No, it wasn’t a romantic date but an awkward family meeting instead. You know how parents can be, especially when it comes to their teenagers, and boy, did Kotaro and Akane’s parents make matters uncomfortable for both of them. It was quite hilarious to watch as well, to be honest.

Well, following this very awkward meeting, they both took part in a race together. And our star Akane outperformed them all, leaving Kotaro in awe of this beautiful new girl he had just met. And as the story progressed, our budding writers Kotaro and Akane began chatting on the LINE app.
Then one day Kotaro finally gathered the courage to ask Akane out, which was a very heart-melting episode indeed. The anime certainly did not hold back from keeping the romance real but with just the right amount of magical elements in it.

But hey, what love story is complete without a little bit of drama? And ‘Tsuki ga Kirei’ didn’t disappoint there either. While Kotaro had begun pining for Akane, Chise was falling head over heels for Kotaro. Akane got to know about it too but hey, the heart wants what it wants, right? So when Kotaro and Akane’s relationship was finally revealed, it led to some dramatic situations to be dealt with.

The first season ended with Akane and Kotaro graduating from the third year which meant relocation for Kotaro. It was a sad moment for both of them but it didn’t end their relationship!

So if there is ever a second season of ‘Tsuki ga Kirei’ we can expect Kotaro and Akane in a long-distance relationship. It could revolve around the challenges that it brings as well.

The anime’s first season revolves around Kotaro and his girlfriend, Akane. Then we have Akane’s friend, Chinatsu, who plays an important part in the first season. So we can expect to see all three of them in the next season as well, should it ever releases because for now, there’s no news about it.

Season 2 of the anime has not been released yet. What’s more, there have been no official announcements either about it being in production. So, naturally, there’s no way to watch the trailer for the second season.

As you must be well aware by now, the second season hasn’t been announced yet so there’s no way to watch it anywhere online. But you can go over to 9Anime and stream the first season online anytime!