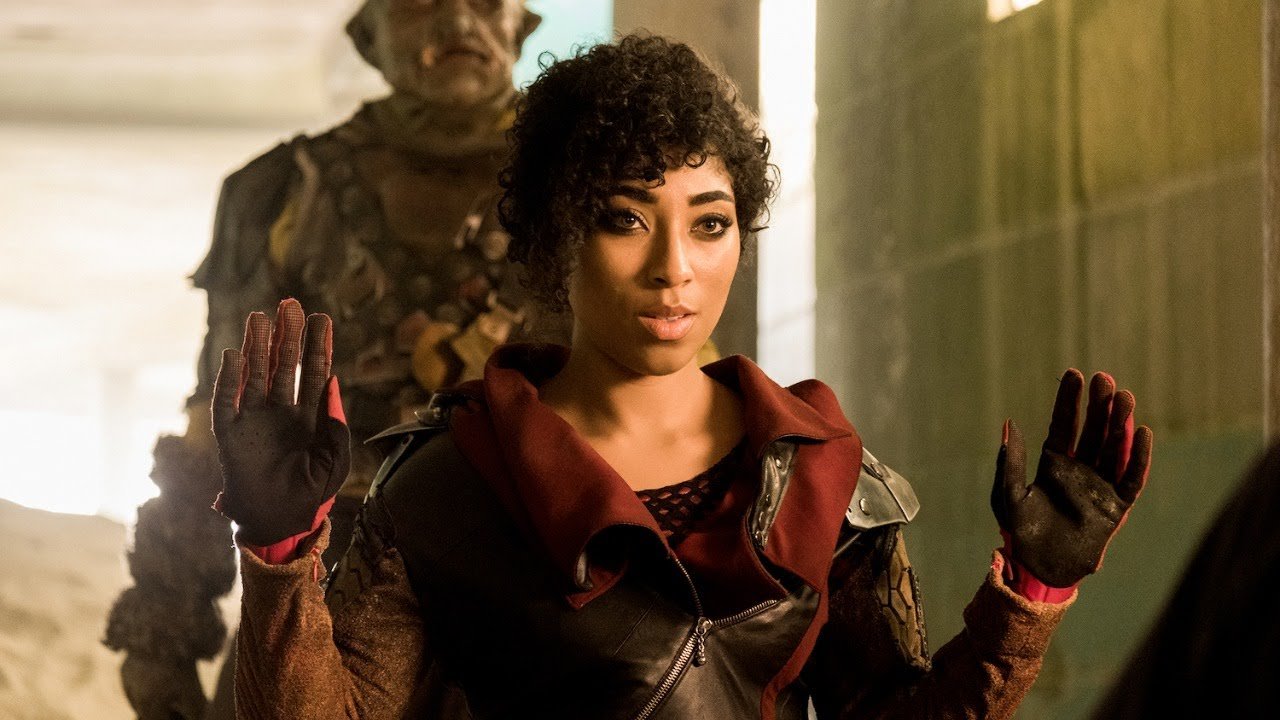 The American science fiction television series Vagrant Queen premiered on Syfy on March 27, 2020. The series is based on the Vault comic book series, which was written by Magdalene Visaggio and illustrated by Jason Smith, and is co-produced by Blue Ice Pictures. After one season, the show was canceled in June 2020.  Syfy announced on May 17th, 2019 that the comic book series Vagrant Queen had been ordered straight to series. F. J. DeSanto and Damian Wassel of Vault Comics co-produced the TV show with Blue Ice Pictures. Danishka Esterhazy, as well as Jem Garrard, worked as showrunners and directed several episodes. Jem Garrard, Mariko Tamaki, and Mika Collins were among the show’s writers, with Gerrard penning around a third of the show’s episodes. Vagrant Queen is what happens when you mix a little Thor: Ragnarok with a dash of Guardians of the Galaxy, then swap out the chiseled, cis-het male hero for a fit, but realistic-looking Black heroine. It’s a wacky space adventure with captivating characters and funky places, and it’s full of the humor and passion that made those movies wonderful.

Season 1 of ‘Vagrant Queen’ began on SyFy on Friday, March 27, 2020, at 10 p.m. ET. It lasted 10 episodes, each lasting 55-60 minutes, and ended on June 4, 2020. The fourth episode of the show was initially scheduled to run on Friday, April 17, 2020, at 10 p.m. ET, however, it was canceled. It was then rescheduled to air at 11 p.m. ET on Thursday, April 23, 2020. The remaining episodes were similarly set to air on Thursdays, indicating that the show had been shifted from its primetime slot. This isn’t a good sign for any channel because it means it’s simply burning through the remaining episodes before canceling it.

The season’s numbers continued to plummet throughout the episodes, with abysmal ratings of 0.07 in the 18-49 demo and about 0.37 million viewers for its premiere. With these variables in mind, the prospects of renewal are limited. Season 2 of ‘Vagrant Queen’ will most certainly be canceled, in our opinion. However, if it receives international funding or syndication deals, it may be renewed for a second season. In the improbable event that this occurs, season 2 of ‘Vagrant Queen’ will premiere in 2022.

Elida, a scavenger who refuses to claim her title of Queen, is played by Adrian Rae. Her work can be seen in films such as ‘Light as a Feather and ‘Atlanta.’ Tim Rozon joins her as Isaac, her deadbeat pal. He is most recognized for his roles in the films “Diggstown,” “Wynonna Earp,” and “Schitt’s Creek.” Alex McGregor, who starred in ‘Spud,’ plays Amae, a sardonic mechanic who accompanies Isaac and Elida on their journey. Commander Lazaro, played by Paul du Toit of ‘Maze Runner: The Death Cure,’ is a ruthless and deceitful antagonist.
Colin Moss plays Hath, Clayton Boyd plays Lead Admiralty Officer, Leon Clingman portrays Dengar, Bonnie Henna portrays Xevelyn, Vash Singh portrays Krob, Steven John Ward portrays Chaz, Richard Wright-Firth portrays SAO, Carel Nel portrays Agent Lloyd, and Zak Rowlands portrays Drifter.

Elida, once a child Queen, is now an orphaned pariah hunting for the bare essentials across the cosmos. Elida is always on her toes because the Republic government’s soldiers are out for her blood. Elida’s old foe Isaac pays her a visit, stating that her mother Xevelyn, who was murdered by Commander Lazaro, Elida’s childhood foe, is still alive. Elida possesses the mission’s street smarts and fighter skills, while Isaac possesses survival skills. They still don’t have someone who knows how to work with automobile engines and other machinery. They encounter a mechanic named Amae, and the three of them set off on a mission to rescue Elida’s mother from her previous kingdom. While doing so, Elida must contend with Commander Lazaro, a power-hungry psychopath, and his army of maniacs, who have been persistently trying to track her down in order to put an end to her bloodline. There are still some faithful ministers in the kingdom who urge Elida to claim her throne and accept her fate, but she has her sights set on only one thing: Mission Rescue. Apart from Lazaro, Elida and her squad must contend with cannibalistic creatures, mutated monsters, shootouts, parking tickets, dangerous worlds, and so on. With Arriopa in shambles, Elida makes one last attempt to beat Lazaro while fending off a new menace.

If you have not watched the series till now, then watch the whole previous season here on Amazon Prime Video.