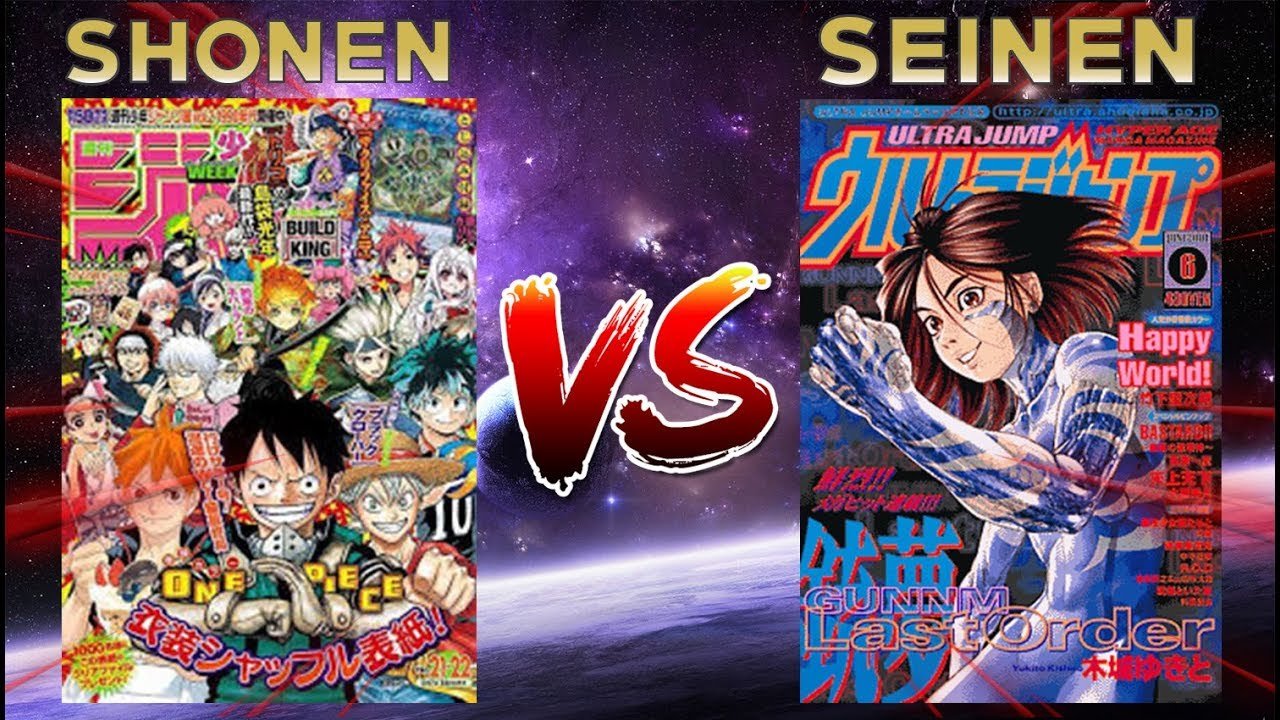 Animals as a worldwide favorite now among, men, women. children, adults, etc. But their original target audience was quite different and was categorized under different genres of anime. The Seinen is a certain type of anime that mainly gets differentiated through a particular demographic. This demographic is majorly targeted at the male, young and adolescent male sector. The word seinen In Japan actually means the youth hence this category of Anime has been suitably made for the set audience. But the background and the history of this animal are also quite interesting. this is because of the rise of a trending and famous genre of comic books called Geika style. This has gained prominence because of comic book readers who wanted more sophistication and a matter of perspective on the existing mangas which are very simple and devoid of realistic approaches. examples of writers of this genre are Yoshihiro Tatsumi Takao Saito, Sanpei Shirato Try to illustrate the new type of angles in a much more professional way. They had to duality in their approaches as a focused on both slice of life Manga And historical ones too.

This type of animal has a very large sector variation in its artistic outlooks and conceptual backgrounds.  One-Punch Man, Golden Kamuy, Ghost in the Shell, Hellsing, Initial D, Maison Ikkoku, Master Keaton, Mushishi, Oh My Goddess, etc. One of the most famous examples of this genre of Anime is Tokyo Ghoul. if you have not seen it you must see it yet you will definitely get a clear idea about what this type of anime is. The manga of this anime has a unique flat that is the use of Kanji along with Furigana Which is the type of reading aid helping the young readers. This anime looks to cater to the male side of the audience and their emotional and physical maturity. Another very distinct fact about Seinen anime that research shows are that they are aired on later-time slots on Television. The major roles and focus characters of this anime also are mostly elder in age and the storyline and set of events are mentally heavy since they have mature twists and turns.

Also Read: How Much Do Animators Make Per Month?

What Is Seinen Anime?

Seinen animes solve complicated problems and hurdles with a “cynical and pragmatic” approach. This anime brings out the plot on several different levels and explores many layers as it dives into depth from multiple perspectives. The dynamics of different elements are also very thoughtfully and carefully taken care of. Since the anime comes with realistic illustrations and grown-up concepts, the visual effects of this anime also have to be kept at par so the animations come out really alive with commendable effects.  Since the events and happenings are heavy and twisted with thoughtful philosophical elements they are able to create a thought-provoking tension among the audience. This tension gets them addicted to the show. The other things that make the show interesting are the personal feel, experience, and interpretation. These types of anime also have the ability to make people question societal structures and reexplore them in their own way or try to insert doubts on identity frames.

Senine series portrays problems and chaos that actually occur between two visual beings like people or a visual set of teams like factions, nations that don’t have a clear moral ground. The rivalries have various different means such as violence against innocents, protecting the common good. These animes do not always have a side that is morally right. Moral complexity is highly blended into the personality of the focus characters involved in several Seinen too. This serves the purpose of a realistic approach in the anime because the lead characters might not be the epitome of perfection, their gap areas are highlighted as much as their strengths. But every yin has a yang, right? Every saint was a sinner once and in our daily life too all the good people have a bad side and vice versa. But the ultimate outline of the lead character’s persona ends on a positive note. The same happens with the villain’s narrative. They are also shown from a human point of view, as to why they are who they are. They are also given a “cool” persona that appeals to the audience and increases the dynamics of the plot.

How Are Seinen Different From Shounen Animes?

Most anime lovers have their own genre of preference when it comes to watching Japanese animes. There are two very sought-after anime categories among these animes. They are Shounen and Seinen. For those who often confuse them or have trouble telling them apart, I have put down some differences in this article that will help them know which category suits them and works for them. It is also natural for viewers two confuse these two categories because they also have a heavy resemblance to each other but their tangents are completely different. To prove this point, I will start with their basic target audience. While we have already discussed Seinen focuses on young and also mature male audiences, Shounen also focuses on male audiences but on younger age and mentality. For example, Naruto is a shounen anime that clearly appeals majorly to middle-school kids who fantasize since childhood to acquire superpowers to conquer the world. The convincing plot of Naruto helps to motivate and cater to the hopeful and ambitious kid inside them as the exaggerated techniques feed their young energy and zest for life.

The second major difference that one can spot in these two categories of anime is in the way they deal with their action sequences. Shonen anime is known for its fantastic execution of action scenes that win over the audience and take the plot to a whole new level. Most of the animes around the globe belong to the shounen category because of the way it appeals to people visually when the fight scenes come around. Again, taking the example of Naruto, this anime thrives on stunning visual effects on battle scenes and visual techniques. The way the color schemes and movements of the actors are framed is absolutely mind-boggling. So while the audience is processing the amazing narration by the protagonists they are also feeling throw the portrayal of such real-life fight scenes. On the other hand, Seinen anime focuses more on the overall elements of the plot while taking care of different themes and topics. They also have impressive action scenes in some animes but it is not a dominant factor in Seinen anime. Seinen anime often aim to take over the audience clout by their conceptual events and interesting sequence of characters’ lives.

Another factor that separates Seinen from Shounen is the type and category of narrative. Being animes they do fill the viewers with heavy fits of laughter but they have a very prominent flare of story-telling. Seinen is created for a more mature set of audiences so it is only natural they live up to their audience expectations and relatability factor. Hence, they have more adult content that connects to grown-ups. The maturity and grown-up factor in the Seinen animes are reflected in their psychologically advanced concepts and extremely deep themes that needs serious time for the brain cells to work their way through so that viewer can make sense of the background of the story and its progress along with it. The mature take of Seinen anime is also seen through their comfortable usage and portrayal of nude scenes to communicate the story more effectively to the audience. One of the most famous seinen anime marked for its mature tension and steamy scene is Tokyo Ghoul. The conceptualization of the show is serious and compact while the visuals are complementary to it making it an outstanding anime show. While Shounen is very light-weighted when it comes to the twists and turns of the story. As heavy and detailed the visuals of the battles and aggression are, the narrative has a softer approach than Seinen overall. Seinen has a rigorous rough and tough approach to framing reality while Shounen has a warm and inspiring approach that makes fantasizing reality. Shounen romanticizes the cruel elements of daily life while Seinen brings the raw truth out of them. But both these types of anime are entertaining watches at the end of the day. They both massively work hard on characterization and build romantic parallels alongside the main storyline. Both of these anime have contributed hugely to the anime by showcasing and portraying anime with not only a fabulous script but also memorable characters and visual effects.

Let us know in the comments what you think about both of these anime and if you have anything to add to the difference or similarities between Shounen and Seinen, you must enlighten us with your knowledge and opinion. Hope you will also check other articles and engage them related to anime, TV shows, trending entertainment topics, and other affairs of your favorite shows.

Must Read: How Fast Is Naruto? Here’s The Speed Of Naruto!