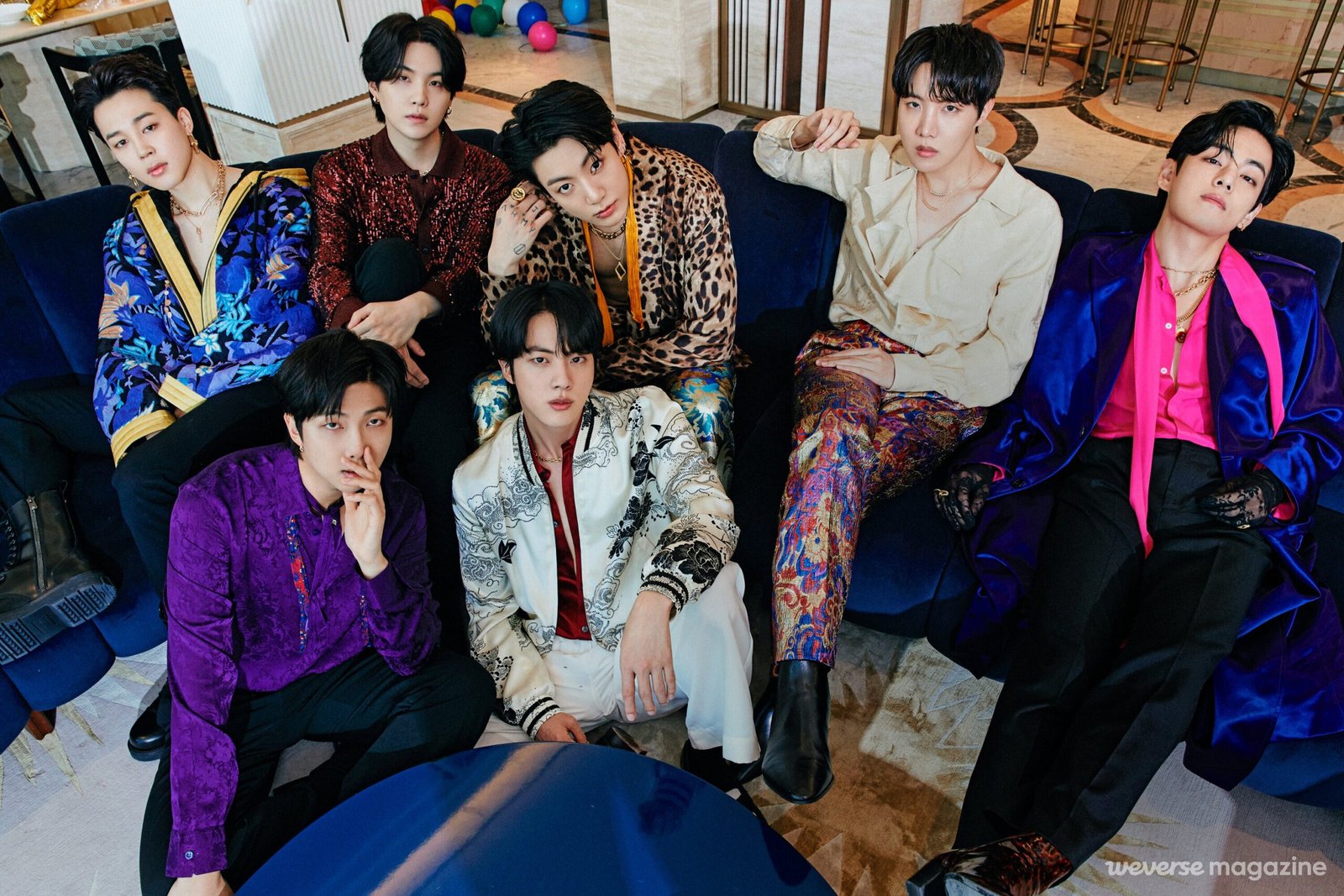 Annyeonghaseyo Army! Excited for today’s article right? I am as much excited as you all to discuss one of the most loved bands of K-Pop Bangtan Sonyeondan aka BTS. I am sure all the readers who are reading today are definitely a member of the army or have listened to BTS songs and might be listening right now too while reading this article why shouldn’t we get excited after all this is about the world-famous band BTS.

The 7-member globally recognized band BTS has been trending and ranking at top of almost all the lists with their releases and it is because of their songs that have a connection, a message that can and has been impacting the world in a positive way. This approach of using music to cater to and address issues have made the idol group so relevant and popular in recent times and the popularity is, without doubt, going to grow even further.

They have not only become a change agent for their fans but also have become an important agent for change in the world as they got the opportunity to attend the UN as the envoys of the President in 2021 and performed Permission to Dance at the UN after they attended and shared their and the views of their fans in UN in 2018 and was able to have a successful campaign called Love Myself with UNICEF. The members recently even met the US president and Vice President Of the US to discuss the issue of Asian Hate Crime.

The band with one dream of singing and creating music has now become a voice for many. They have made a huge fanbase for themselves which is just unimaginable and all because of their connection with the ones who listen to them. They are not just relevant globally but for their nation as well both economically and culturally as their popularity has been one of the factors for the growth of K- a culture all around the world.

One thing that has been going on about all the fans in India considering a huge fanbase for the band is who is the most popular member in India? Were you also thinking about this? Well, guess what I have got the answer for you with a lot more things about the band in this article.

It is quite a difficult call to bring out one of the members as the most popular member in India being an army myself and an OT7 but then since you all have opened this article to find out that one member’s name who tops the list in India then I am not going to disappoint you in any way. But then one thing is for sure all of them are the best without doubt and there is nothing wrong to put your bias on top.

So, without any further ado let’s find out that one member who has taken over the hearts of maximum army members in India.

Which BTS Member Is The Most Popular In India?

The BTS member who is the most popular in India is *Drumrolls* Jeon Jungkook. Yes, you read that right and it is time for all the JK fans to celebrate as the maknae of the boy band is the most popular and admired member in India. And I am not saying this on any assumption, rumors, or speculations but I have proper facts of the research that justifies the statement.

The South Korean Government conducted market research that produced the data. The Korean Ministry of Culture, Sports and Tourism, and the Korean Exchange Agency conducted the 2022 Global Hallyu Trends survey with several categories and Jungkook toped most of the categories leading him to become the most popular BTS member. The Global Hallyu Trends Survey (2022) received data from 18 countries that ranked Jungkook the most admired among the other members.

READ MORE: Ezra Miller Net Worth: How Much He Earns?

Jungkook And His Work

Jungkook has been one of the most loved members since the inception of the band, because of his talent, singing, personality, creativity, entertainment, hard work, and several other sides that he has offered to the fans. Over the 24 years, Idol has now become even more active as he shares glimpses about his life through his Instagram through stories and posts on his dance practices, workouts, and boxing and even engages with his fans on a personal level by answering their questions which have brought him even closer to his fans.

Especially after the group has taken a break from the group activities to focus on themselves and their solo work. Jungkook, as you all might already know, has recently collaborated with Charlie Puth on the song Left and Right which also received a lot of love, praises, and listenership and became the most streamed song too.

About Other Members And Their Work

J hope recently became performed at Lollapalooza becoming the first member of the band to perform solo at a music festival. He has also released his album called Jack In The box which has gathered positive reviews and has already entered the Billboard Top 100 list with his solo More. The fans cannot wait to see other releases from his album that he is teasing about through his pictures. He has also teased all the fans with his video with a new look for WKorea where he looks absolutely amazing.

Taehyung aka V has been attending a lot of fashion shows and even recently went as the ambassador of Celine alongside Lisa and Beomgyu to Paris for Celine Fashion Show. He will be appearing very soon on your screens with his Wooga gang on Disney+ on the popular show In the Soop. By the way, do note down the platform if you do not want to miss the soothing fun that the gang had. We also got to see a day in his life that was released on the official BTS youtube channel and we will be getting more vlogs by other members too so do not forget to hit the notification bell because I know you wouldn’t want to miss any vlog.

Suga has been experimenting, learning, and exploring several areas that interest him and is keeping himself busy as revealed by him and other members in the 2022 BTSFESTA video that is available on youtube. He has also produced music for In the Seom, the game made on and by BTS. His song with PSY called That That performed incredibly and became one of the popular songs this season.

RM has been in the news for several things, especially for his aesthetical pictures on Instagram from the museums he has visited. Because of him, it has been reported that the museums have gained visits and have become quite a popular spot. Jimin and Jin have been sharing pictures and little posts on Weverse and Instagram keeping the fans updated and I am sure that just like me you all also cannot wait for other members’ albums and vlogs and other surprises that will be revealed gradually.

READ MORE: Josh Groban Is Single? Who Is His Girlfriend?

Bangtan Sonyeondan or Bulletproof Boy Scouts or BTS is now undeniably a global phenomenon that is touching and leaving remarkable marks in everyone’s heart. A boy band of 7 boys founded by Bang Si- Hyuk the CEO of Big Hit Entertainment only dreamt of reaching as many people as possible with their music and message. The band includes Kim Namjoon (RM) who is the leader of the band, Kim Seokjin (Jin), Min Yoongi (Suga or Augst D), Jung Ho Seok (J-Hope), Park Jimin (Jimin), Kim Taehyung (V) and Jeon Jungkook (Junkook). Their journey started in 2013 with their debut after training for 3 years rigorously.

Now they have become a world-famous band and have attached several prestigious positions and awards to their name be it in Guinness Book of World Records, Grammys, Billboard, AMA, MTV Music Awards Melon Music Award, or others. They even have performed on prestigious platforms and stages because of their talent and love from their fans and have become the Entertainer of the year. They are not just a band but an emotion for their fans with whom they connect with their creations, dance, and message on a personal level. They have collaborated with famous artists like Coldplay, Halsey, Charlie Puth, Lauv and have shown the variety they can offer and how dynamic they are.

The band has recently ended their music tour Permission to Dance which was a massive hit and has now gone on a break for focusing on themselves and their solo work but will be still working as a group but with more focus on themselves to give Army a new side of the members.

The 2-time Grammy nominated K-Pop band BTS has recently released their album ‘Yet To Come’ that includes their new songs and old songs that the members filtered themselves and the fans chose through polls conducted online. The boy band released a live concert of their new songs from the album and collaborated with Anderson Park who played the drums for them.

They even released their photoshoot for the album Yet to Come which celebrates the 9th glorious year as a band followed by Weverse Magazine Photoshoot which became the talk of the town as the members were seen in a new glorious form. The boy band did mention that they will be focusing more on their solo projects which means that we will be getting solo albums of the members. The release has already begun with J-Hope’s album release.

The members are also keeping themselves quite updated and active on social media. Several videos have been released on their activities including their In The Seom project, vlogs, shorts, and a lot of pictures.

In terms of future releases, the official information has yet not been released but we have got a schedule of the release of the vlogs of each member on Youtube on their official channel and the information that BTS is the official ambassador for the 2030 Busan World Expo. They are also coming on Disney+ together very soon. Apart from that, you know the members conduct live on Vlive where they connect with the fans.

One thing that we can say is that it is going to be a surprising, amazing, and fun journey like always because we will get to see a new side and version of all the members and they are not going to disappoint us in any way.

So, in the end, we can say that we have several things to look forward to which are not meant to be missed at any point in time. For the time being let’s end on a happy note Army. Keep listening to BTS, Love Yourself, and Borahae.