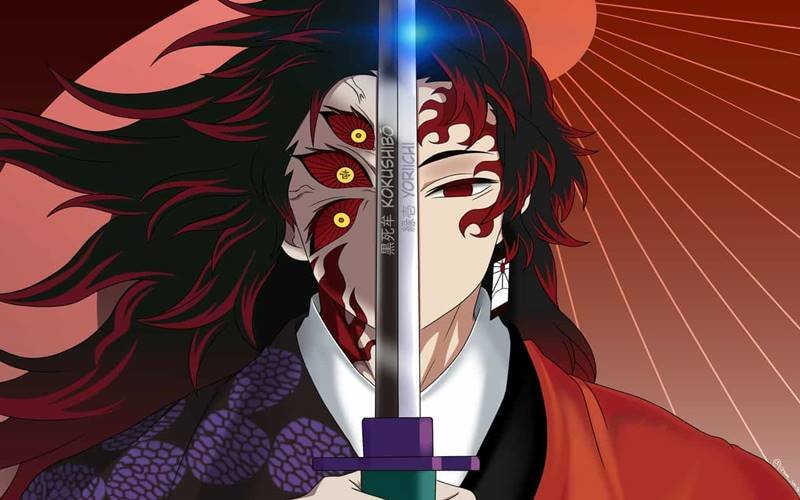 Demon Slayer, literally who doesn’t know this name. There are no anime lovers alive on Earth who haven’t watched Demon Slayer. Adapted from the manga, the anime is one of the most-watched series of all time. You will find a lot of people adding the poster of this anime as their wallpaper. Maybe you are also one of them. But are you confused? Then first, read this article then go watch the anime.

Moving on, let’s discuss who is Kokushibo?

Who Is Kokushibo In Demon Slayer?

He is one of the major antagonists of the anime. He is a demon who is affiliated with the twelve-demon moon also called Twelve Kizuki. Kokushibo holds the first rank and hence holds the highest position. 6’3 inches tall, dark purple eyes, was once a human who later turned into a demon slayer. He is the strong demon just behind the Demon King himself. Circumstances converted him into a Demon Slayer.

Now, let’s see his history. Why did he change?

Our antagonist was born in the Sengoku Period with the name Tsugikuni Michikatsu. He was born with his twin brother Yoriichi, in a period when the birth of twins was considered ominous. So, when he and his twin brother were born, they were considered a bad omen, and hence a need for the assassination was seen. Yoriichi had a birthmark on his forehead and when that caught his father’s eyes. His father thought that he should be killed before he brings misfortune to the family. But much to Yoriichi’s fortune his mother was strictly against this. She disagreed with the agreement of killing her own son.

So, an agreement was made instead of this. He would have to spend his life as a priest and would be sent to the temple as he turns 10 years old. Although he was kept separate, he was pitied a lot by Michikatsu.

Growing up the brothers used to fight a lot, and Michikatsu was often jealous because of his brother’s sword skills. He felt if their father knew about Yoriichi’s potential then he would be sent to the temple instead of him.

Let’s move on a bit.

After 10 years, Michikatsu became a samurai and married a woman. Together they had two children. An incident that took place after this drastically changed his life. One night his camp was attacked by a demon but was killed by Yoriichi before it could harm them. Yoriichii even apologized for arriving later for their rescue.

This made Michikatsu really jealous and a story of vengeance made him leave his family and start his training like a demon slayer. He was of course helped by his brother. With dedication and practices along the side of a Breath of Wind user he eventually awakened his demon slayer mark. He developed a style from the both Breathe of Moon and Sun. Much to his frustration of never being able to beat his brother and further being persuaded by Muzan Kibutsuji. He converted into a demon.

Although he was jealous of his brother and hated him. But after he witnessed his death, he realized that he actually loved him deeply.

He strived to become a slayer after he witnessed the slaughter of his family and saw his sister transform into a bloodthirsty demon.

Watch the anime Demon Slayer which is rated 8.57 by MAL. It has 26 episodes running for 23 mins each. This is an action supernatural anime that will leave you breathless. Watch the anime on Netflix.

This is all you need to know about the antagonist. Watch the anime to watch him in action.

ALSO READ | Is The Hook Up Plan A True Story?