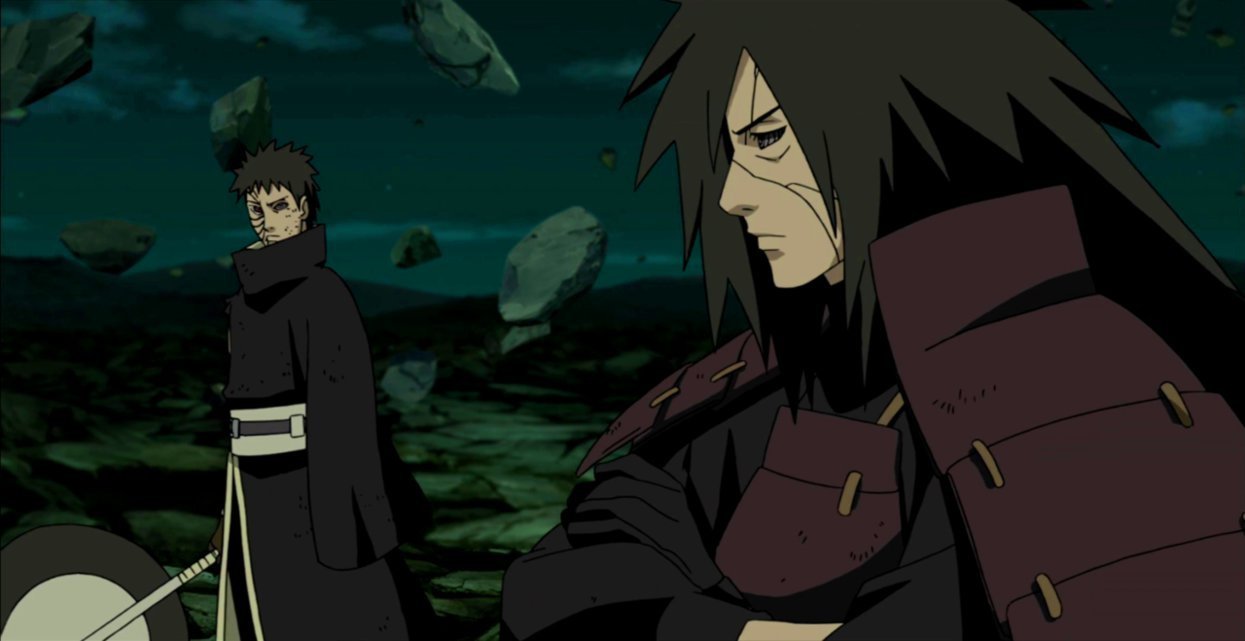 “When a man learns to feel love, he must also bear the risk of feeling hate”….. These are the words uttered by Madara Uchiha himself when he first met young Obito Uchiha. This very line states the perspective of Madara Uchiha with clarity. The self proclaimed savior of the shinobi was always out there doing everything all by himself. He never trusted anyone else to stand beside him specially after the death of his brother Izuna Uchiha. He was very authorative and stubborn and never believed that he could be wrong. This very mentality blinded him which made him turn his path and walk the down the path of darkness. The name Madara Uchiha used to strike terror in the hearts of almost all shinobis in the world of Naruto. Madara Uchiha appeared in flesh for the first time in front of the audience after about three hundred episodes from when his name was first hinted at in Naruto: Shippuden, before that the name Madara Uchiha was thrown here and there. Not only the shinobis in the series but the audience as well from the moment he was introduced in the series knew who Madara Uchiha actually was.

The impact and influence he left was like no other in the history of shinobis. Madara Uchiha was a man with a plan and he was ready to go to any extent to achieve what he wants to. Even before the appearance of Madara Uchiha in his full form in the Great Ninja war in front of the allied forces, the suspense and build the character had created totally paid off. Madara not only single handedly took out an army of skilled allied shinobis but he even made the five kages bite the dust without even reaching half of his, potential. Madara clearly showed the difference between a shinobi and a God during the war. He perfected the way of using his mangekyo sharingan and no other shinobi other than Hashirama himself was capable of standing above if not shoulder to shoulder with Madara. Madara and Hashirama grew up during a very rough period in the world of Naruto. Long before, the village system was established, different clans used to engage in combat with each other in order to gain power. And most of the time, children were the victims of all the battles and warfare. Madara was the son of the leader of Uchiha clan back then, while Hashirama was the son of the leader of Senju clan who had a war going on against the Uchiha clan. Despite being in two different clans Madara and Hashirama both had the same aspiration which was to establish true peace.

However, with time Madara and Hashirama ended the war between them and called a truce as Hashirama put forward his hand for friendship. They established the Konoha village together so that there can be peace and the next generation can flourish peacefully. However, Madara soon realised that true peace and tranquility is impossible to achieve in the world they live in, where there is light, there will always be darkness. Madara soon isolated him from not only Hashirama but from his own clan as well. Soon he embarked on his own path, all wrapped up in the darkness of his own thoughts.

The Uchiha clan in the Naruto series is distinct and highly prestigious. As the members of the Uchiha clan are the only humans in the world of Naruto who can manifest, develop and utilize the Sharingan, which is one of the strongest occular jutsus in the world of Naruto. Each and every Uchiha has the capability to develop the Sharingan and not even a single being who doesn’t belong to the Uchiha clan has the ability to do so. However, despite having hold of powers of such extent, the Sharingan is nothing but a curse for the Uchiha clan if looked at from a different perspective. The Sharingan grants its user various power that one can only imagine even in the shinobi world of Naruto. However, to develop and attain the highest point of a Sharingan which is known as the Mangekyo Sharingan, the Sharingan holder must encounter a drastic emotional impact and as a result, most of the known Mangekyo Sharingan holders in the Naruto series has gained this power by having encountered losing someone they deeply love or tragic events similar to that. The Uchiha Clan apart from having Sharingan are known for their distinct shinobi skills and high intellect, however, most of the Uchihas have their heart tainted with hatred, tragedy and generational anger which is valid.

Tobi, the mysterious masked member of Akatasuki who later revealed to be Obito Uchiha initially revealed his identity to be Madara Uchiha. Madara Uchiha was the person who nursed back young Obito to health after his left side got ruined as got crushed by boulders. However, Madara was the only person who pushed Obito towards darkness by orchestrating Kakashi into killing Rin and making Obito witness that which turned Obito insane with rage. Madara did this because he saw Obito as a perfect candidate who can help him to achieve his plan of establishing the Infinite Tsukuyomi and he knew what hatred, despair and loneliness can do to a person. Obito was clearly getting manipulated by Madara yet he didn’t even realise that until it was too late. Obito saw Madara as his mentor who helped him realise the truth of the world and he used his name to operate Akatsuki and other activities in order to have more authority over them while keeping the secret of his identity intact.

Madara Uchiha- Madara Uchiha, was voiced by Naoya Uchida in Japanese and Neil Kaplan in English and both of them did an incredible job of bringing the character to live. Madara Uchiha the self proclaimed savior of shinobi left a mark not only in the hearts of the characters in the series but the audience as well.

Obito Uchiha/ Tobi- The Japanese voice of Obito Uchiha is played by the Japanese voice actor Wataru Takagi from Chiba Prefecture, Japan. He was born on July 25, 1966, and is also popular for his roles such as Onizuka from Great Teacher Onizuka, Zoro from One Piece, Oyamada Shigemasa of the NHK Taiga drama Sanada Maru, Shiba from Bleach, Wataru Takagi from Detective Conan, Teacher from Doraemon franchise, Caiman from Dorohedoro, Kenji from Initial D franchise, Okuyasu from JoJo’s Bizarre Adventure: The Diamond is Unbreakable and many more.