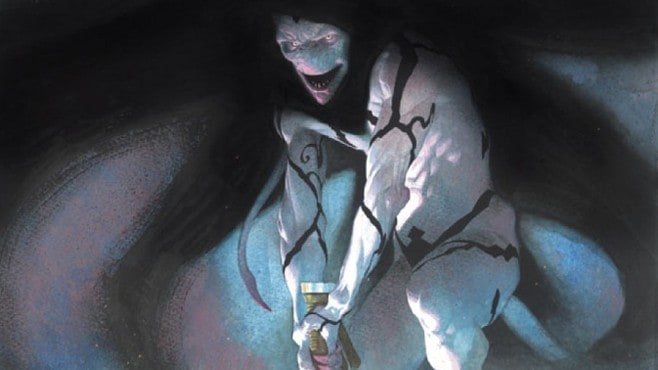 The two-hours and thirteen-minutes movie were released on 8 July 2022; it reveals the character of Gorr. After a tremendous character development, Thor got Thor: Love and Thunder, a fourth movie to lead, and the fans are excited to watch what happens next in Thor’s life. Although the plot details of Thor: Love and Thunder remain a mystery, some famous audience-loved characters will be back on the big screen.

Gorr is not the exact adaptation of the character mentioned in the comics. The MCU needed to make changes to fit this character in the Marvel Universe. This character is bound to give a tough fight to Thor.

Now, let us come to the main topic of this article and discuss it. Why Gorr Wants To Kill Thor?

Why Gorr Wants To Kill Thor?

Although the character of Thor is heroic, there are reasons for Gorr to kill Thor. The main reason is: finding the location of Asgards. If you have read the comics, you already know what I am about to say.

According to the comic book, Thor found Slavic gods dead while Thor was with a Viking raiding party. Gorr then attacked Thor. The only reason for attacking was to find out the location of Asgards. Later, Vikings saved Thor. Later, Thor and Gorr had a battle that continued for centuries. Gorr used the blood of the Time Gods to time travel, attacking different versions of Thor. This battle took place at several places and times.

Gorr likes to be in a superior position. He does not care if a god is good and kind. He would kill the god to become a god. No matter how sweet a god might behave, Gorr will not spare any god. Gorr’s tragic backstory makes the hatred of gods look reasonable.

This Gorr’s hatred might overtake Thor in this trending Marvel movie. We might witness a similar event happening with Thor in the Thor: Love and Thunder movie.

There are enough reasons to believe Gorr can kill Thor. Jane Foster becomes Mighty Thor, Valkyrie becomes the king of New Asgard, and the Avengers team is inactive. The future of Thor in the Marvel Cinematic Universe seems to end with this fourth installment movie Thor: Love and Thunder.

The only question is how? Will Thor retire or get killed by Gorr? As the plot of Thor: Love and Thunder remain a mystery, this will be suspense for the audience.

But this might not be the case with Gorr, as Gorr’s survival will benefit the MCU while making Eternals 2. Gorr killed the Celestials. He could target and kill the Eternals, who are also in the position of god in the Marvel Cinematic Universe. It won’t be surprising to see Gorr as the main villain in the Eternals 2, as he loves to seek a position.

So, although this is an exciting twist in the storyline, it won’t be a surprise to see Gorr killing Thor. Last we have seen the depressed Thor in the Avengers: Endgame, which led him to become fat. Thor seems to be on the wrong track already, so it won’t surprise that he losses his fight against Gorr.

No plot details of Thor: Love and Thunder make the future of Thor unclear to the audience. As of now, the chances of Thor’s survival are 50%. Gorr is one of the most exciting villains in the MCU and might survive more than his debut movie.

Why Gorr Wants To Kill The Celestials?

Gorr is one of the most exciting villains in the Marvel Cinematic Universe. We have already cleared his intention behind wanting to kill Thor. The same applies in this case: Gorr’s desire to be in a position.

The oldest race of The Celestials is also responsible for the destruction. These Celestials plant seeds on the Planet to let new Celestial born, and as the new Celestial gets born, the entire Planet seeded gets destroyed.

A prediction suggests that Gorr’s Planet got destroyed while making new Celestials in the Marvel Cinematic Universe. This reason is enough for Gorr to want to kill the Celestials. Interestingly, there is another theory that suggests Gorr has killed several Celestials. That’s how he got titled The God Butcher.

We discussed Gorr’s desire to kill the Celestials. We also talked about the theory suggesting Gorr has already killed several Celestials. If this theory stands true, Gorr possesses god-like strength.

As Gorr kills the Celestials, the power of that Celestial transfers to Gorr. So, Gorr must possess the cosmic energy after killing the Celestials, making him the number one enemy and biggest villain for Thor.

If Gorr kills Zeus in Thor: Love and Thunder, he must possess the powers of Zeus. This power makes him easily capable of fighting and killing the Gods.

Although there are not many Celestials in the Marvel Cinematic Universe, there are other god-like characters in the MCU. So, Gorr will not get satisfied with just killing the Celestials and will go after these god-like MCU characters.

It will be interesting to see if Marvel Cinematic Universe brings new Celestials into the MCU. The movie Thor: Love and Thunder will define the future of Thor and the existence of Gorr in the MCU with other Celestials.

Gorr In The Marvel Comics

In the Marvel comics, Gorr has a tragic backstory. Gorr was born on a Planet where people starved to death. Earthquakes, lack of water, and wild animals are some of the regularly noticed things on his Planet.

As a child, his parents made him believe in god. But, dealing with several tragedies in his life, he lost his belief. He witnessed the death of his parents, his wife, and all his children.

Gorr lost all his hopes, as his last son died of starvation and heat stroke. He became an atheist, as he believed the gods never answered his prayers.

Later, Gorr decided to take revenge on the gods for not answering his prayers. He traveled thousands of years in the cosmos to kill all the gods. Gorr does not possess any god-like powers, but he is an experienced fighter. The super weapons that he uses grant him the superpowers needed to kill the gods. These powers include constituent-master manipulation, regeneration, and much more.