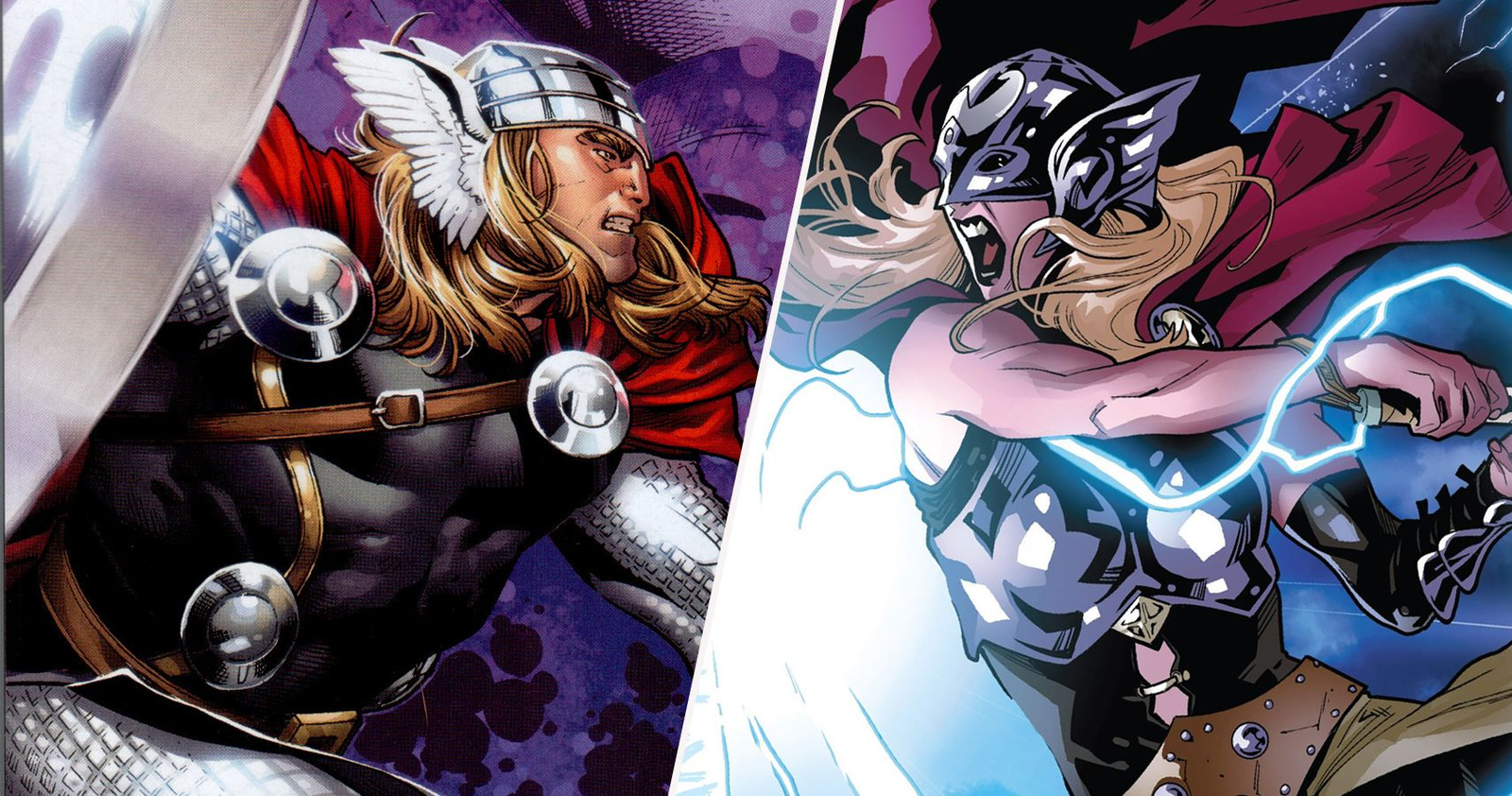 The world beyond our own is again to be revealed as we are about to see Thor making a new arrival with his new movie. Thor: Love and Thunder is the third movie of the Thor movie series, which continues the story of Thor after the Avengers: Endgame. The movie is said to be released on July 8th, 2022. The movie series is mainly focused on the character Thor and the other surrounding characters. This marvel character has made the list of one of the most powerful superheroes in the world.

Thor is known to be one of the most powerful heroes in the Marvel universe. This immortal god possesses powers that one can imagine. His hammer alone is heavy that no one worthy can lift it. But have you ever imagined there would be a superhero who can be more powerful than Thor?

Mighty Thor is a newly introduced character to Marvel Cinematic Universe. This character has been mentioned in the comics and is said to possess more powers than Thor. And we are here to compare their strengths and tell you who is stronger, Mighty Thor or Thor!

Thor Odinson, simply known as Thor is the God of Thunder from Asgard, the Realm Eternal. He is the son of Odin, the king of Asgard. Thor is also worshipped as one of the gods from the Norse Mythology and is also considered a Viking God.

ALSO-READ | Where to Watch Spider-Man: Into the Spider-Verse Online?

The Odinson is generally known as one of the invincible warriors in the ten realms for the strength and power that he knows from his hammer, Mjolnir. In the comics, we get to see that after seeing Thor using his power recklessly and his irresponsible behavior makes Odin strips off his title as a god and sends him to the Midgard (which is Earth) as a mortal. Thor is reborn as a god when he understands his responsibility and their values.

What are Thor’s Strengths?

Thor is an all-mighty god in the marvel universe. The Odinson is blessed with a lot of strengths and gifts that are way more than a mortal hero to handle. His skills and strengths are mostly inherited by Odin, his father and some are self-improved and learned that he has taken from the humans with whom he has fought along.

Thor is known for his superhuman strength. Apart from being the God of Thunder, this god is also known as the God of Strength. He holds the power that can defeat heroes and villains like Hulk, The Silver Surfer, and many more. He can defy gravity. Thor holds superhuman speed, stamina, and durability. His abilities are just like a warrior’s.

Thor was trained for combat and wars at a young age. He also has an immune that is much more advanced than a normal being. His hammer gives him the power of teleportation, generates electricity, and tracks down people or valuable items and it also helps him to see through the illusions. He is also known to be a strategist always ready to fight and wars.

His weakness is the anger that he holds, his mind works like a war-hungry warrior who is ready to kill their enemy at the first sight. He is considered weak when he is without his hammer or his choice of weapon. The Odinson is overall a strong warrior who can defeat their enemies at ease.

Who is Mighty Thor?

Jane Foster is the mortal nurse that helps Donald Blake in his medical research. Doctor Blake (the mortal form of Thor) asks her to be her assistant and help him in his lab work. While they spend their time together, she soon finds out about his real identity and starts to accept him as such. They soon fall in love with each other but somehow they get separated and continue to live on.

Many years later, Jane Foster was diagnosed with Breast Cancer. She finds the hammer, Mjolnir which gives him the power of Thor. Thor accepts it as such, still unknown to the true identity of the other Thor, and names her Mighty Thor. Odin helps to save Jane by giving her more powers which makes her the MIghty Thor she is today.

What are Mighty Thor’s Strengths?

Just like Thor, Mighty Thor holds the same accountable powers as Thor. The Asgardian powers that are permitted to her are the superhuman strength, stamina, durability, and strength which we can also see in Thor. The hammer, Mjolnir gives her the power of Thunder, teleportation, and other powers that Thor possesses. What is different you might ask. The only thing different is that Mighty Thor is a human first and then a god.

Jane Foster was originally a human with no extraordinary powers. She was originally a scientist/researcher (according to movies)  and a nurse (according to the comics) who fought against Breast Cancer. The power that Odin gives to her is a little more than what Thor owns. Odin gives her some of his powers that make her a little more different than Thor.

She knows both the realms and various weapons. She can also see through the manipulation that Loki uses to trick people. Her perspective is very different from what Thor has.

Yet, she is just a human with Godly powers. When she is away from her hammer, she is projected powerless just like Thor.

Is Mighty Thor stronger than Thor?

After the complete brief information about the two heroes, we come back to our question. Is Mighty Thor stronger than Thor?

We come to know that both the heroes are the creations of Odin. The powers that are given to them both are almost the same to a degree but we can say that it’s entirely equal.

In the comics, it is said that Thor has used his powers in the wrong way. Thor was always portrayed as a power-hungry god before his rebirth as a proper god. It is also shown to the readers or the viewers, Thor is somewhat powerless with his hammer, Mjolnir. The power he gets from the hammer is like an addition to his superpowers. But when we talk about Mighty Thor, she is completely different.

Jane Foster is a Midgard born, or simply we can say, an earthen without any supernatural powers. When Odin gave her the powers, he had added some more additions to her. Other than the normal Thor powers, Mighty Thor understands the true value of the power she holds. Unlike Thor, she has the idea of both Midgard and Asgard. She can also calculate her victory rate and makes use of those powers in a better way.

And as mentioned before, Mighty Thor can see through Loki’s manipulation and tell who is the real Loki. Mighty Thor has much more knowledge about weapons that we don’t see in Thor. Odin has added his wisdom in the MIghty Thor, which makes her more like him. She is less impulsive than Thor and takes action differently than Thor on a battlefield.

So here is your answer, Mighty Thor is indeed stronger than Thor. Hence the word Mighty has been added.

As mentioned before, the story this movie holds is a continuation of Thor’s plotline after the Avengers: Endgame. In the previous movie, we get to see a dull version of Thor, who almost had all his hope and will to fight gone before the final battle. Now he continues his path to find inner peace as he sets off to rebuild Asgard, his home realm, and make it a better place to live. To get back, he recruits Korg and Valkyrie by his side. In addition to the Marvel Cinematic Universe, we get to see Mighty Thor, or Lady Thor, who is simply known as Jane Foster. Jane Foster is the past lover of Thor whom we can see in the first movie of the series. Under some circumstances, she gets the godly power and becomes the Mighty Thor. Along with her, Thor gets on the mission to save the other gods from the dangerous Gorr the God Butcher, who is eliminating the gods and taking their place.

The story is gathered from the two trailers of the movie. The trailer gives us a gist of the original plotline and it also holds more than it shows. The movie is going to unlock the future plots for the marvel universe and might reveal some of the new characters as well.

Where to Watch Thor: Love and Thunder?

The movie Thor: Love and Thunder are here to tell us more about the world of Gods and the monsters beyond this realm. This movie of Godhood is yet again to be seen and is highly anticipated by the fans.

ALSO-READ | Are The Last Survivors Based On A True Story?