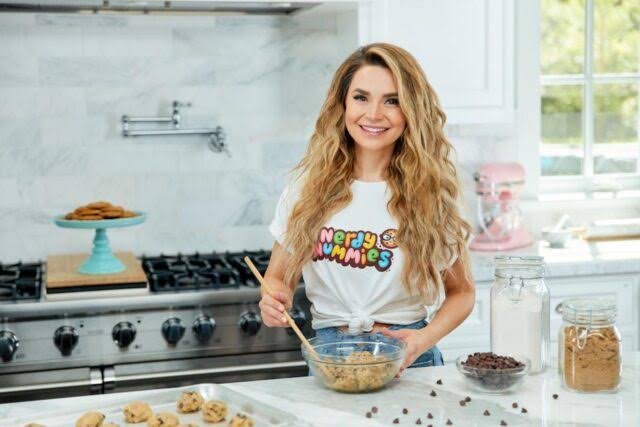 Rosanna Pansino is one of the highest-paid female YouTubers. And definitely an inspiration and encouragement for all the youngsters with big dreams too. Do you love baking and find it relaxing and welcoming? Then you must follow her channel Nerdy Nummies and check out all the delicious recipes she shares. So today we will talk about the net worth of this famous YouTuber in this article. You would be surprised to know how successful she is at such a young age.

You must enjoy the delicious baking that Rosanna does on her YouTube channel Nerdy Nummies. Not only are the treats visually enticing but taste heavenly too. So how much is this famous YouTuber’s net worth? You would be amazed to know how much successful Rosanna Pansino has been when it comes to her career. And taking into account her earnings from YouTube, book royalties, and various entertainment endeavors she has a huge net worth. Rosanna Pansino has a net worth of $9 million as of 2022. Undoubtedly a great inspiration to all the young women out there dreaming of making it big in the industry.

Rosanna Pansino is one of the most famous YouTubers currently. She is a multi-talented author, singer, actress, and YouTuber. She had always wanted to be part of the entertainment industry and thus she moved to Los Angeles to pursue her dream career as an actress. And she managed to land a few successful roles in television series as a newbie. Rosanna’s first venture into television series was with VH1’s reality show Scream Queens. She was a participant in the show. Following that she landed some roles in CSI: Crime Scene Investigation and Parks and Recreation.

Read Also: Young Bleu Net Worth: How Much He Makes From Rapping?

However, her career took off when she opened her YouTube channel encouraged by her friends. Nerdy Nummies started slowly but gained huge popularity in no time. On her YouTube channel, Rosanna mainly shares videos of baking and cooking. She bakes cupcakes, cookies, cakes, brownies- you name it. However, the part that fans enjoy the most is these goodies are created based on famous personalities from movies, books, series, and video games. Fans love watching their favorite characters being transformed into baking goodies. Rosanna won multiple awards for her interesting and fun cooking channel. She was awarded Best Foodie By Shorty Awards and Best Chef in Social Media. Rosanna was also nominated multiple times for the Streamy Awards. She has 13.6 million subscribers on her YouTube Channel.
Rosanna is also an established author. She published her cookbook The Nerdy Nummies Cookbook in 2015. Following its huge success as a New York Times Bestseller, she published her second book Baking All Year Round in 2017.
Rosanna is also the host of the famous HBO Max show, Baketopia. Thus undoubtedly she has successfully established her career in the entertainment industry and still strives to become better.

She was born Rosanna Jeanne Reardon on June 8, 1985. Her hometown is Seattle. Rosanna’s parents are Michael and Jeanne Reardon. Her father is of Welsh descent while her mother is of Croatian and Italian descent. She also has a sister named Molly Pansino. Pansino is a very secretive person and likes to keep her personal life away from the internet.
Rosanna has wanted to become an actress since her childhood. So after graduating from Native American Elementary School, she moved to Los Angeles to pursue her dream career. Her excellent cooking skills are inherited from her father and grandmother. She also attended Pacific Lutheran University for her higher studies. However, she found fame with her amazing cooking abilities.

So what goes on in this successful YouTuber’s personal life? You must be curious to know whom she is dating or if she is single currently. Let’s get into all the details then. The 36-year-old YouTube sensation has stuck to one person since 2010. Rosanna is dating 34-year-old fellow YouTuber, Mike Lamond. They met in 2010 and officially announced their relationship in 2018. Both of them announced their relationship in a YouTube video that gained huge views and likes. Their fans were elated at the news of them as a couple.
Mike is popularly known by his YouTube channel name HuskyStarcraft. He is a former sports commentator and currently runs his own YouTube channel. However, Mike took a break from YouTube and social media for quite some time in between and he is working on launching his new YouTube channel. Mike is the manager and director of Rosanna’s channel and also appears as a guest on her videos.

Read Also: Blueface Net Worth: How Much This Rapper Made Till Now?