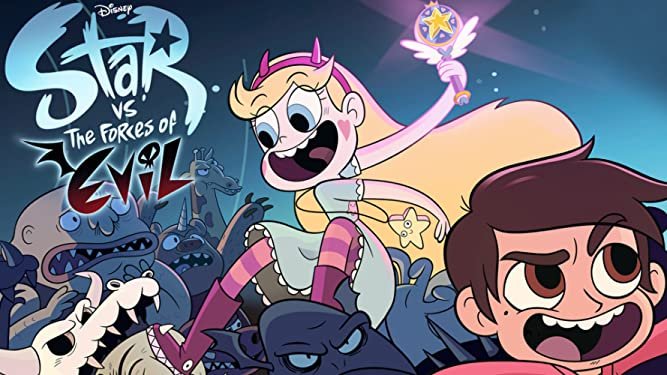 Star Vs The Forces Of Evil is a show that will take you on a flight of fancy with several fictitious situations based around creative characters, manly a girl with magical superpowers. It is a slice of life, fantasy animated show that has both adventurous actions to keep you hooked and comedy to fill you with laughs. Daron Nefcy created this innovative show with the help of the creative director called Dominic Bisignano. This show is a hit among the animated shows so credit must also be bestowed on the developers namely Jordana Arkin and Dave Wasson. This American show was aired on Disney Channel and Disney XD. The first episode called ‘Star comes to earth’ was sired on Disney Channel on January 18, 2015, in the form of a preview. Disney XD also joined on March 30, 2015, where the premiere successfully made a new mark of being the most-watched debut series among the animated shows of the same network. But the series last aired with its return to the Disney Channel. It has had a total of four seasons and seventy-seven episodes until now.

Star Vs The Forces Of Evil Season 5 Release Date

Star Vs The Forces Of Evil has a very loyal and consistent fanbase which is not a surprise given the fulfilling success of all four seasons. The fans are eagerly waiting for the follow-up of the next season of the show. Unfortunately, it has been announced there will be no next season by the makers and creators of the show. But miracles can happen anytime, right? A petition for the renewal of the show in the form of a new season or a movie has been submitted to Disney. This petition gained a lot of attention and support so let’s be hopeful about a positive outcome for the continuation of the show.

Star Vs The Forces Of Evil Season 1 Story

In Star Vs The Forces Of Evil we get to see a very refreshing narrative from a sci-fi point of view. Created Darcy Nefcy made sure the viewers are entertained whenever they put the show on. With its magical twist and turn of events, it is a very wholesome plot that not only appeals to the excitement of kids but also serves as a recreational watch for the adults. The story opens with the background story of the main character called Star Butterfly who was none other than the heiress herself who take upon the Butterfly Kingdom someday as the magical princess. This whole concept was shown to be
placed in the Mewni Kingdom. Following the norms of family traditions and rituals, star Butterfly received the family heirloom of the magical wand on her fourteenth birthday.

Must Read: 20 Best Anime Games That You Should Play

Being young and naïve, she makes the unfortunate mistake of setting the family castle on fire. With great concerns about this consequence, her parents were not sure how to guide her so they thought of sending Star Butterfly to Earth as a foreign exchange student. Following her parent’s wishes, star Butterfly came to earth to study at the Creek academy to master her magical powers. Here she met many people but got close to her roommate named Marco Diaz. He was opposite to her in terms of personalities but that ended up in a great compatible as they became the best of friends. Star Butterfly lived with his family in suburban Los Angeles. The growth of their bond seemed to evolve as they took on thrilling adventures and missions in unison to beat those who tried to harm them.

Star Vs The Forces Of Evil Season 5 Characters

The main characters of the show are Marco Diaz voiced by Adam McArthur, Star Butterfly voiced by Eden Sher, Pony Head voiced by Jenny Slate, Ludo/ King River Butterfly voiced by Alan Tudyk. Out of these, Star Butterfly is the focus character who is a princess from a dimension named mewni. She has a whimsical and impulsive personality added to her magical powers. The plot main is built around her actions and character development. Marco Diaz is her best friend from the school she went to train her magic in. In contrast to Star Butterfly’s bubbly personality, Marco is a very reserved character who is very heedful and cautious of his actions living a vigilant life. Owing to the complementary characteristics of each other’s personalities, they quickly become best friends and then lovers Ludo is the villain character standing against this magnetic and supreme pair.

Where To Watch Star Vs The Forces Of Evil Season 5?