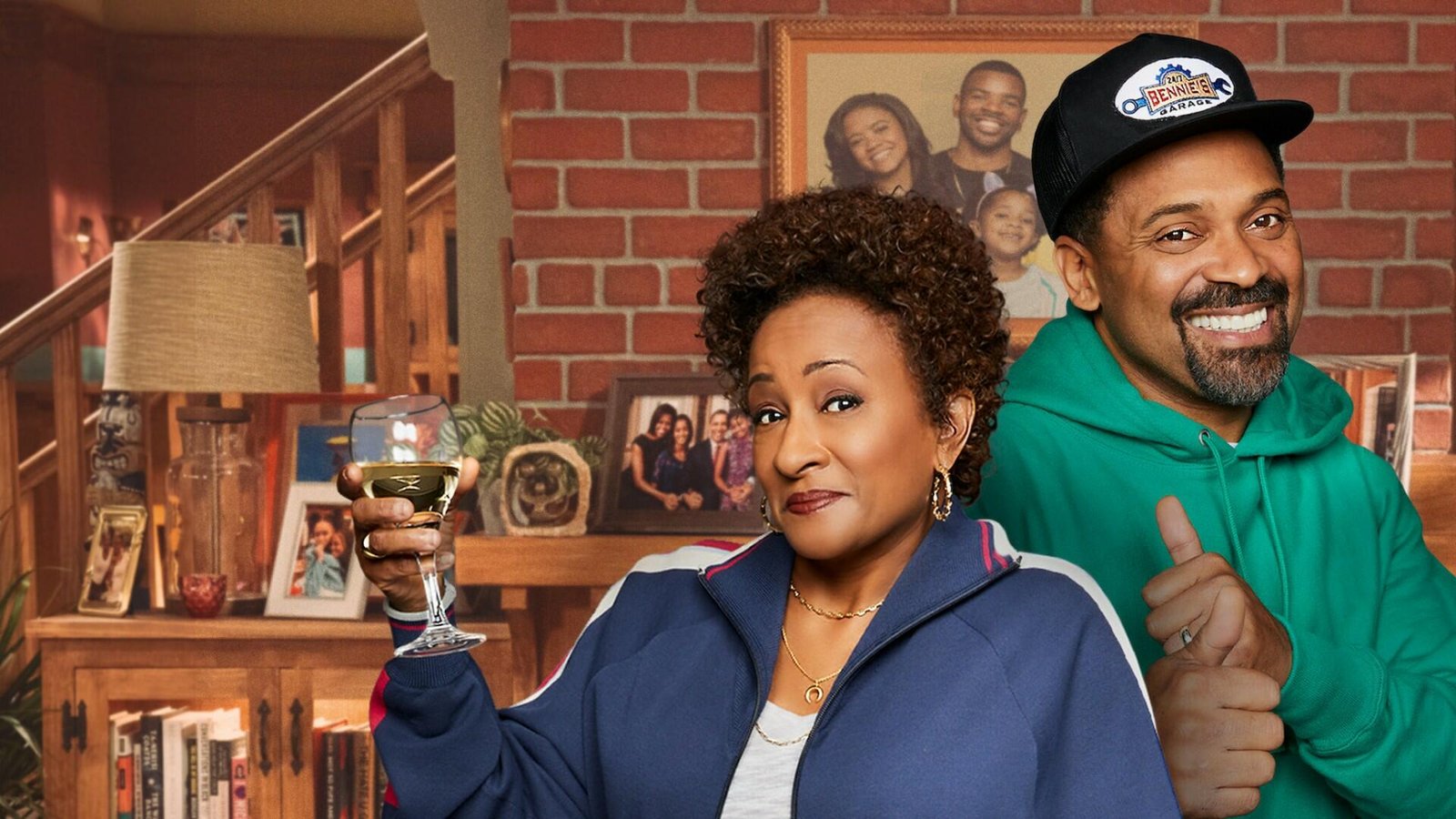 The Upshaws is an American family sitcom directed by Regina Y. Hicks and Wanda Sykes. The series is about Bennie Upshaw and his working-class family living through their lives and the odds of residing in Indianapolis. Rated as 6.8 stars on IMDB, the series involves Kim Fields playing the part of Bennie’s wife Regina and Gabrielle Dennis playing the role of his ex, Tasha.

According to The New York Times, The Upshaws is a “throwback sitcom with modern views.” Through this sitcom, the makers highlight the topics of romance, sexuality, and love. In fact, some people also compare this series to various black sitcoms that existed in the late ’90s, such as “Family Matters” and “The Fresh Prince of Bel-Air.” The writers  of The Upshaws, Sykes have created this sitcom with Regina Hicks who is well known for her old sitcoms such as “Girlfriends, Insecure, and Sister Sister.” This could be the reason why the series has a very retro look and feel.

The series first aired on Netflix on 12th May 2021 and in June 2021, the series was renewed for further seasons. Let us now know what is the release dates of further seasons and everything you can expect from the storyline.

While the 2nd season of The Upshaws aired on 29th June, the channel has not announced the premiere dates for season 3. However, considering the schedule of the second season, we believe the 3rd should follow its normal pace and be around the summer of 2023.

According to Netflix official, Tracey Pakosta, The Upshaws has been a major success for the platform. Here is what she wants to say about the makers of the show,

“Wanda and Regina have created a fresh entry in the tradition of Black sitcoms that are real, relatable, and incredibly funny. We’re thrilled to see where they, take the Upshaws in the second season.”
According to the sources, Netflix has also chosen to increase the number of episodes from ten to sixteen for the second season. Thus, depending on the success of the second season, we might also expect to have a further increase in the number of episodes for the third season. However, what remains the same is how the episodes will retain their runtime i.e. 30 minutes.

According to fans, The Upshaws is a “retro comedy with contemporary views”. There are various possible plot developments that can take place if season 3 of The Upshaws is renewed. Since we now know that Bernard Jr. has come out as gay to his family, there are various outcomes in the further season. The show might go ahead with the theme of how he explores the world as an out gay man.

The next season might also explore a new subplot regarding the little girl who had appeared on Upshaw’s doorstep and had declared herself as Bennie’s daughter. So, who is this girl? Whether she was conceived during the break period of Regina and Bennie?

Finally, we will also witness how after clearing her GMAT test, Regina’s choices about her professional life impact her and her family.

The previous season of The Upshaws got into the depth of the marital conflict between Bennie Upshaw and his wife, Regina. Bennie and Regina had been longtime high school sweethearts, and now they look after their four children. However, with the changing time and their bond, they decide to separate for a while to sort things out. As a working-class African-American family in Indiana, the previous season has also made commentary on the class status of a common person, along with the family members trying to support each other throughout.

On the lighter side, we have also seen that no matter how loveable and charming Bennie is for his family, there always will be a constant banter between him and his sister-in-law Lucretia. Lucretia being a bold energetic woman only puts up with Bennie for her sister’s sake.

In fact, she has always been that protective sister who will keep a watchful eye on Bennie.

At the end of The Upshaws season 1, we see the whole family together, as Bennie and Regina rekindle their relationship. Bernard Jr. comes out as gay to a former sexual partner. Regina announces how she has been unable to clear her GMAT test.

The Upshaws Season 3 Cast and Characters

The Upshaws has been a story about its peculiar characters. Therefore, it would be difficult to let go of anyone. Thus, the makers do not seem to make any major changes to the cast in the coming season of The Upshaws.

Actors are expected to come back for the previously stated roles such as Mike Epps as Bennie Upshaw, Kim Fields as Regina Upshaw, Diamond Lyons as Kelvin Upshaw, Wanda Sykes as Lucretia, Khali Spriggins as Aaliyah Upshaw, Page Kennedy as Duck, Journey Christine as Maya Upshaw, Michel Estime as Tony, Jermelle Simon as Bernard and Gabrielle Dennis as Tasha.

As far as the story is concerned, the show has corny parents but Bennie’s realistic. He could be in no doubt an undeniably frustrating character to have as the head of a family sitcom. He is a man-child who has never entirely grown up, so whenever he understands that he has messed up, his apologies tend to be self-centered for Regina to forgive. And while Regina might not be vocal about this, the show has, a sarcastic voice for Regina in the form of her sister Lucretia. She is always a go-to to let Bennie know his many shortcomings.

Do you want to know the timeline of the series’ characters? Bennie’s son, Kelvin is conceived after Regina and Bennie’s breakup. According to the story, when Regina and Bennie were in high school, they had their first kid, Bernard Upshaw Jr., an adult who considers his father to be a remote figure. Regina and Bennie’s youngest daughter is Maya Upshaw and Duck is Bennie’s best friend who works at the garage. Fun Fact: he has recently been released from jail,

Before the release of Season 2, the team had released the first 12 photos from the episodes of season 2. In one of the images we see, Bennie, Tasha, and their two daughters happily singing in their kitchen.

Where To Watch The Upshaws?

The Upshaws is a Netflix Original series and you can always watch it on this OTT platform. Even if Netflix has not made the dates of another season official, the writers have clearly made the audience realize that “The Upshaws” is going to stick around for a while.

However, if you haven’t yet watched its first season, here is the list of all the episodes of Season 1  and its makers.

The Upshaws’ success also tells us the fact that the audience today looks for a sitcom that has diversity. Fans these days are looking for content that features  Black, middle-class families and their need to cater to their kids. The concept of a protagonist with a complicated life is just not a mere description of a man who has two kids around the same age with two different women is just a part of it.

Having said that, the series is also about a particular blended family. On one hand where the writers are generally looking for forced reactions and cliches, “The Upshaws” lets the characters react to the situations and events all individually. For instance, in terms of the family’s status, every individual had progressed a certain way. Bernard Jr. is reluctant to forgive his father for being absent from his childhood but Kelvin wants to bond with his half-siblings. . Aaliyah who is never too sure of Kelvin, bond with him over their mutual embarrassment of their corny parents.

It’s this level of complication and individuality that makes The Upshaws worth watching. It is a package deal in the form of a sitcom the main characters have an interesting yet complicated life.  However, what could be a cliche is the trope of “mom who gets things done while the dad gets to mess up”. But when a show is this willing to find new ways to make such tropes more grounded and relatable, it’s worth watching out.