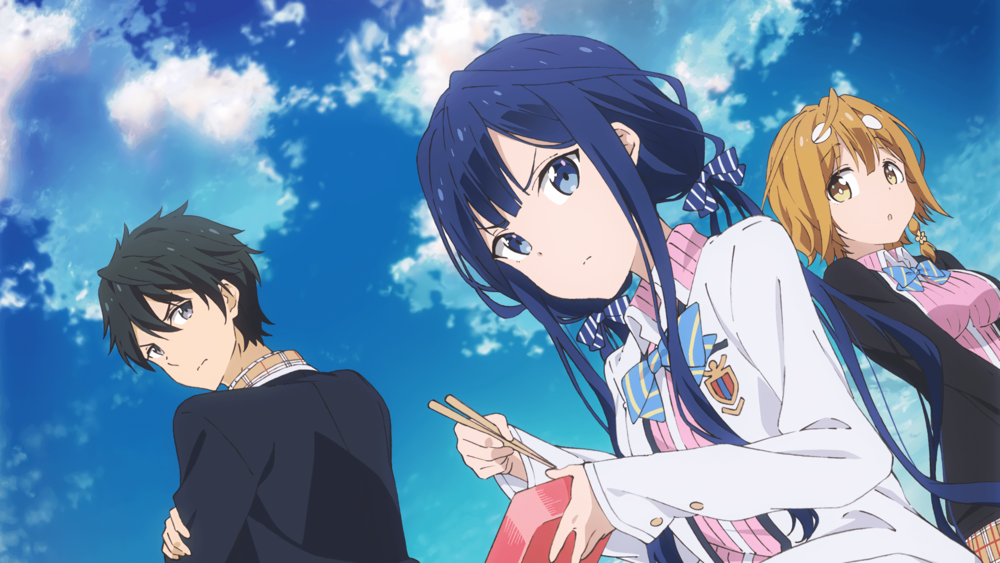 Love comes in all sorts of different forms especially when it comes to movies, series, or anime Some people love a true romance, others like romcoms, and some just want to cry a whole lot. Luckily, one can find all of these in anime. From tearjerker to comedy, there’s always a whole lot of romantic anime out there for almost everyone. Here’s a list of a few included mixes of older and newer romance anime and a couple of films as well. The twelve most romantic anime to be listed in this article are, ‘Fruit Basket 2019, Your name, my love story, Tokyo revengers, Horimiya, Nisekoi, Love of kill (2022), Your Lie in April, His and her circumstances, Centimeters per second, lovely complex and rent a girlfriend’. So, here’s hoping, the readers find the tastes and can somewhere connect to their matches through this article.

Above mentioned names are claimed to be such romantic anime that are giving the audience a sense of love and peace at the same time over the past few years till now. And some have released with such flavors that it is going to provide the same feel to the audience for a couple of coming years for sure!

Starting with the most romantic one of 2019, which is Fruit Basket. It falls under the genre of Romantic comedy, Slice of life, and supernatural. Its latest season got released on February 18 0f 2022. The series currently has three seasons with 25 episodes each. Apart from all other twists and turns of the plot, the reason why it is considered a romantic anime is because of the portrayal of the love triangle from the very beginning. The lovable triangle between, Kyo, Yuki, and Tohru. Both Kyo and Yuki develop feeling for Tohru and both felt a sense of a relationship. This is exactly what brought the series under one of the best romance anime so far. It has a phenomenal set of casting as well, which includes actors like Jerry Jewel in English dubbed as lead that is, Kyo Soma. Laura Bailey as Tohru Honda and Eric Vale as Yuki are considered the three most lead characters. Along with them, are many more as well. All the three seasons in English dubbed are available on both Funimation and Crunchyroll.

Next coming with another romantic name from the list, is Your name.  It is a Japanese animated romantic fantasy film produced by Comix Wave. Which falls under the genre of romance, drama, and fantasy and got released on November 18 of 2016. The plot depicts the life of two school-going boys and a girl who suddenly and unexpectedly begin to swap bodies. One of the reasons to consider it as a love story is because it is less of a story and more of an ode to love and this USP brings the anime such a huge success. Along with everything, its casting played an important role in the making, which includes, Michael Sinterniklaas, Stephanie Sheh, Laura Jenny, Ray Chase, Lorenza Biella, and many other names on the list. It is currently streaming on Amazon Prime.

Following the mentioned romantic anime, ‘My love story’ comes the next with an immensely loved fanbase.  It is a Japanese romantic comedy manga series originally written by Kazune Kawahara. After many obstructions and rescheduling of dates finally it got released on 31st October of 2015 under the genres of only two sections that are romantic and comedy. Looking into the plot, the pillar of this fanbase is, Takeo Goda who is a tall, muscular high school student with disappointing luck with girls. Whoever the girls he likes, they end up been fallen in love with his best friend. The plot takes a twist when it comes to a girl who falls for him and not for his friend and made this a commendable piece of art. Its casting includes Patrick Poole as Oda Hayato (one of the leads). Stephanie Wittels as Saijo Mariya, Juliet Simmons as Amani Yukika, and others.

Another hit romance anime is the Tokyo revengers which are coming with its latest sequel in July of 2022. It covers almost the three most important genres that include love, drama, and action equally. Despite, having an emotionally tumultuous storyline, Takemichi’s love story is acclaimed to be the most loved and best section of the season, which is also a contribution to bringing this series such a huge success and to be on the list of romantic anime so far. Its casting part is appreciable as well, Lizzie Freeman as Hinata Tachibana, Aleks Lee as Manjiro Mikey Sano, Sean Chiplock as Draken, and others. According to many sources, it is available on Netflix.

MUST-READ: 11 Anime Series to Watch If You Loved Yuru Camp

Horimiya coming the next, released on the 10th of January, 2021. It is out and out a romantic plot yet. The plot revolves around a girl named Kyoko Hori, a bright school-going girl who is very jovial, expressive, and positive at the same time. In contrast to her, there’s one classmate of hers who is a boy of being nerdy and seemingly gloomy. Eventually, the plot takes a turn when these two opposite souls become closer to one another and turned out to be a couple by the passing time. It is termed a romance plot. Starting with casting, Marisa Duran as Hori (lead), Zeno Robinson as Toru Ishikawa, Y Chang as Shu lura, Celesta Perez as Kono Sakura and many more.

Nisekoi is a 2018 Japanese romantic film released on December 21 of 2018 in Japan as it has no dubbed version yet so far. The anime includes genres like comedy, romance, and drama. It is a story of a high schooler and Yakuza family member Raku Ichijo, who has been forced into a relationship with the daughter of an opponent rival gang’s boss named Chitoge Kirisaki. Due to this complex love equation, this series has been nominated as romance anime. In the casting section, all did applause giving work, such as Kento Nakajima as Raku, Ayami Nakajo as Cahitoge Kirisaki, Natsumi Ikema as Kosaki Onodera, and many more.

MUST-READ: 8 Shows Like Paradise PD That You Must Watch

Similarly, continuing the series next comes up the Love of kill, which is the latest most of all. It got released on January 13 of 2022. The series is a Japanese manga. The story is based on how a bounty hunter and hitman work together to complete their jobs. It is considered to be a romance anime because Love of kill places a romance story in the crosshairs of a pulse-pounding narrative, which also turned out that same romance into a troubling turn for several reasons. 2022’s Love of kill is one such series that is termed to be as the fast placed combination of romance, action, drama, and comedy at the same time. Keeping the eye on marvelous casting starts with Erin Yvette as Chateau Dankworth being the lead. Ryan Colt Levy as Ryan Ha Song who is another lead. A.J. Beckles as Jim, Michael Schwalbe as Boss, officer Dankworth, and many others. The series is now streaming on Netflix and Apple iTunes.

Your Lie in April

Your lie in April is considered the most romantic anime so far. It is a Japanese anime movie. The movie was released in May of 2015. It is again, out and out a romance genre. The reason why this anime is famous is because of the love equations that have been portrayed and due to which people connect with every character on their own. The love triangle between Kousei, Tsubaki, and Kaori is based on regular life events. Or the death of a loved one, which often resonates deeply within. Or the way it is shown that the person we love, might love you back nut it is just difficult and sense of afraid that works to confess. Casting was truly justified by the actors like Erika Harlacher, Kyle McCarley, Erica Lindbeck, Erica Mendez, and many more others. The movie is currently available on Netflix.

MUST-READ: 12 Must Watch Anime If you Enjoyed Kamisama Kiss!

His and Her Circumstances

His and her circumstances come the next, which is a Japanese manga series. It falls under the genre of romantic comedy. The plot depicts the romance between “perfect” student Yukino Miyazawa and her academic rivalry Soichiro Arima. It also portrayed many other crises, that people have to face every passing day while being in a relationship. These perspectives have been shown by other friends’ relationship issues. Casting played an amazing role in the making, Veronica Taylor as the lead voice for Yukino Miyazawa, Megan Hollingshed in the voice of Kano Miyazawa, Jessica Calvello as Tsukino, Carol Jacobamis as Maho, and others. It is available now, on the site of Zoro and Sub Online.

Here’s coming into the tail of the list, the next name that stands up is 5 centimeters per second. It is a Japanese movie of 2010 which includes romance and drama. The plot is about friendship turning into a celebrated love story. The plot took its turn when Taka and Akari were best friends in the same school for years, and eventually, Akari had to move to another city. This situation put their bond to a test. The reason why it is falls under romance anime. Talking about casting, every character was phenomenal in their part. Takaki by Johnny Yong Bosch and Akari by Erika Lenhart is the two leads. Other than them, Lira Buckland, Tara Platt, and many others were also a part of it.

As the name itself says the anime ‘Lovely complex’ is all about love complexities due to which it falls under the love, drama-comedy genre. It is a series of 1 season so far, but after its 1st release, it received an immensely loved fanbase which may bring the makers to came to a decision of making a 2nd sequel It falls under a romantic anime because it revolves around the story of lead characters that is Koizumi and Ootani. The two different souls encourage each other to find love and turn out to be very close friends by the process but it took its turn when they realize of falling in love with each other before way long back while helping each other. Casts were justifiable as well, Emma Fujisawa as Koizumi and Teppei as Otani being the leads. Risa Kudo is contemporary and many others as well. It is available in Crunchyroll.

Now, coming to last of the list, that is very popular ‘Rent a girlfriend, which is returning with its latest season on January 24 of 2022 and was 1st got released on July 11 of 2020. This is also entirely a romantic drama series. The story revolves around a heartbroken college student who hires a girlfriend on rent but it turns pathetic when their transaction goes sour then they are forced to continue pretending that they are dating. And this is the reason why it has been fallen under the romance genre. Its casting gifted it a fanbase, starting with Aleks Le as Kinoshita and Lizzie Freeman as Chizuru being the lead. Apart from them, Laura Stahl, Landon McDonald, and many others were also a part of the anime. Due to its growing popularity, it is available on Netflix and Crunchyroll.

So, here’s are some of the above-mentioned, romance series and movies that are very popular in the anime franchise for a long time now. Also, hoping the list to be continued with many more masterpieces.