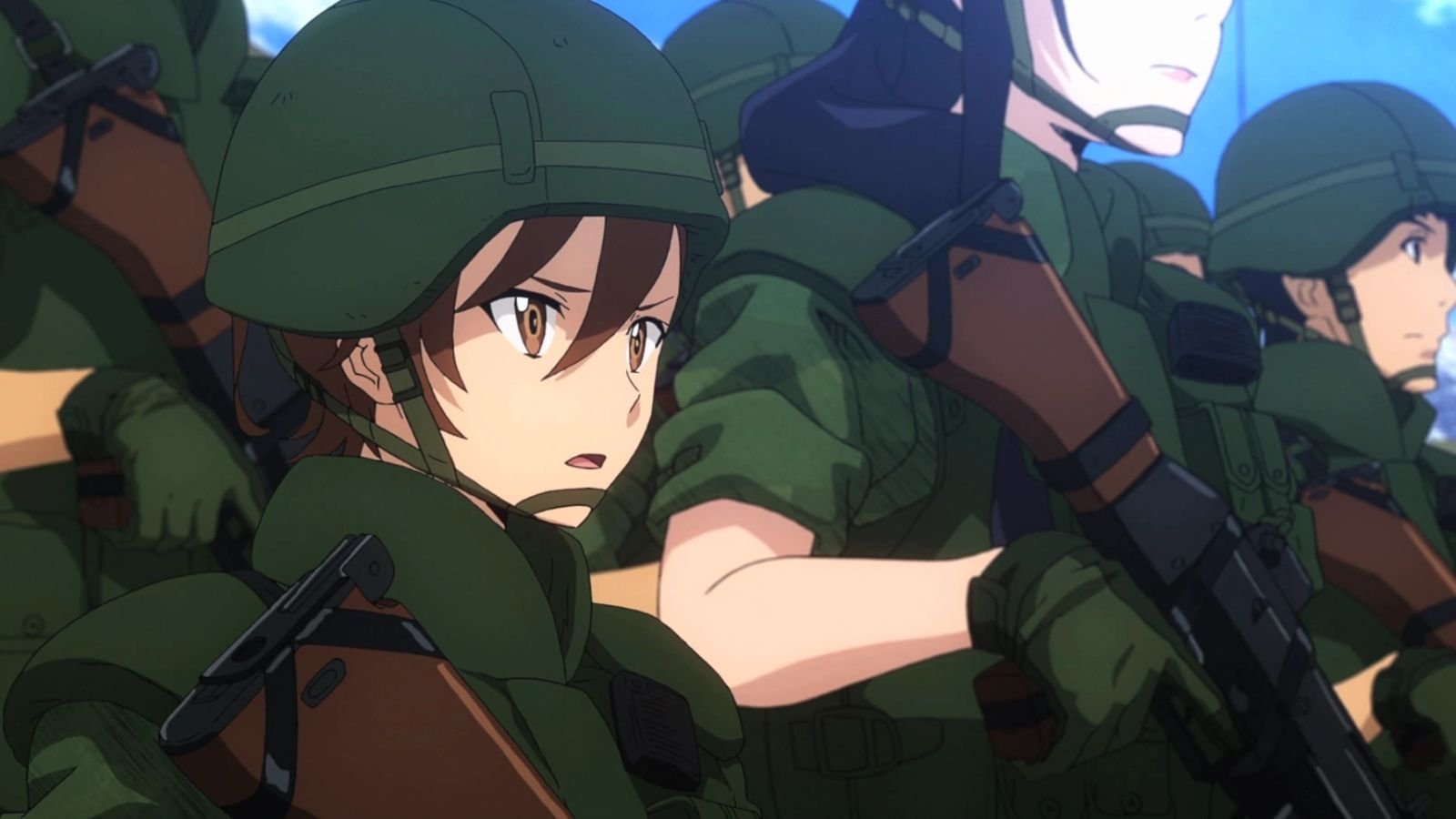 Starting with the first anime with twelve episodes is ‘Angel beats!’. It is a Japanese manga of the year 2010 and touches almost all the genres of drama, action, adventure, comedy, science fiction, and a few more. It’s the story of the realm within the afterlife and the struggle of a band of teens to keep from being to another level and this is all about the story revolves.

Coming next, 2015’s Charlotte is one such anime with actually a different storyline of itself. The brief says, in an alternative world, supernatural abilities manifest in children once they hit puberty, where a boy turns out to be an exception This is how this anime is termed to be a unique one in the genre of comedy-drama and supernatural fiction.

Plastic Memories is another anime with the best plot of the year 2015 so far. The series falls under the genre of, Science-fiction and comedy-drama both. It beautifully portrayed a human and an android working together to hunt down an android hunts rogue. Where humans create artificial people to serve them. And this is the reason why Plastic Memories turned out to be such a hit.

The fourth series comes up with the ‘Mysterious girlfriend X’ from the year 2012. It falls under the genre of romance, drama, and suspense altogether. The series consists of only one season with 13 episodes max.  It is all about, two students, who form a bond between themselves when one becomes addicted to the other’s drool. Exactly, this is where the story took its turn and forms an immensely loved fan base of the anime itself for a long span now.

READ MORE: 25 Anime Like Tekken Bloodline That Should Be A Must-Watch!

No Game No Life

No game no life is an action fiction anime of 2014 under the genres of, action, drama, fiction, and a few more. The series consists of only one 1 season with exactly 12 episodes. The story shows online game siblings are thrust into a new realm where the participants must play to take over the world and this is how the story revolves around throughout.

Madoka Magica of 2012 is one of the most loved and well-appreciated anime of that year with a high IMDB rating together. It is a story of a girl who is offered to make a wish in exchange for a commitment to battling witches. Where these witches are considered to be a group of magical beings whose souls have been tainted by darkness. It is under the genre of fiction, action, comedy, and adventure at the same time which brought the anime to this level.

Another critically appreciated plot with a high IMDB rating comes up is ‘Anohana’. The series is termed the pink of life, It is stated that it provides positivity, liveliness, and a sense of joy. It touches the genres such as romance, drama, a slice of life, coming-of-age stories. The plot portrays a reunion of Menma’s friends after five years of her death to fulfill a wish and here’s where the story began.

In 2012, a manga series got released named ‘One Week Friend’. Which had a commendable storyline in itself. It portrays a high schooler named, Yuki Hase who notices that his classmate is always alone and seemingly has no friends. Later, it is revealed that every Monday she loses all memory of her friends. The series has been declared to be a romantic novel. It falls only under the genre of romantic drama.

Ef: A Tale of Memories

Following the series, ninth comes up with the ‘ef a tale of memories’ from the year, 2007. It has an out-and-out teenage fan base of itself, as it is all about, love, heartbreak, and youth. It illustrates the stories of six different characters, which seem initially unrelated, and begins to interview. The series falls mainly under drama and romance and a few more. It is still that popular and has that same craze as well.

READ MORE: Top 25 Anime Like The Quintessential Quintuplets Are Here!

Gakkou Grashi is number 10th in a recommendation from the year, 2012 and which runs till 2019. It falls under the genre of, Horror fiction, psychological thriller, and a slice of life. The series vividly shows the validation of friendship by Yuki and her friends and how they work to keep her safe after a zombie outbreak overruns the city and turned out to be her real saviors of her by the end. This is also, one of the loved anime among teens which brought the series such an unconditional fan base of youth.

‘Another’ is another anime with only one season of 12 episodes altogether. Again, the series is from 2012 with a touch of, mystery, Horror fiction, ghost story, and tragedy in it. It is a portrayal of a young man named, Koichi who transfers to a new school where he finds himself drawn into a mystery that involves a mysterious girl and finally turned it into a series of gruesome deaths. So, ‘Another’ is truly another benchmark to the anime franchise so far.

Coming to the mid of the suggestions, ‘myself: yourself’ pops up next, which is one more time from 2007. It is a very small anime with some extended validation included in it. The series consists of adventure games, dating sims, simulation games, romance, drama, comedy, a slice of life, and a few better. Sana was a boy who had to leave his hometown and his beloved ones. Then after 5 long years, later, he returns to see how much it had changed. Exactly at that point, the story took a U-turn and made the series such a hit altogether.

MUST-READ: 15 Anime like Hunter x Hunter You Should Know About!

High School of the Dead

High school of the dead is a Japanese manga series in the year 2006. The series has action, fiction, thriller, and horror at the same time. The story tells about to be set in the present day, as the world is struck by a deadly pandemic, the same happened in the series where a deadly virus turns humans into zombies. Where a group of high school students was overwhelmed by the start of the zombie apocalypse at first.

Death parade is a Japanese psychological thriller of 2015 with only one season of 12 episodes. The plot has a spice to it, as we all know, after death humans either go to hell or heaven. But this series shows some goes to Quindecium, which is a bar attendant with a mysterious white hair Decim. Who illustrates that humans either reincarnated or sent to void. And this is what the story revolves around.

READ MORE: 25 Anime Like Black Lagoon That Will Be A Binge Watch For You!

Hellsing ultimate is a 2006 Japanese anime series. The series explains that Hellsing is a British-sponsored secret organization, which is in charge of keeping a check on all vampire activities with some owned weapons and a secret army to protect the people. It has quite a craze and popularity among anime lovers.

ReLIFE is a Japanese manga series in Webtoon format from the year,2013 to 2018. It consists of romance and a slice of life both. Portrays a 27 years old guy who is unemployed, and quits his job after working for a company for 3 months and joining a research program called ‘ReLIFE’. Later, the guy went under medication which made him look 10 years younger and joins the high school one more time.

Coming to the tail of the list, here next comes the ‘Orange’. It is a Japanese manga series of 2016 with every touch in it of romance, drama, and slice of life accordingly. As it is a high school drama with a spectacular twist of two students being a friend and one is extraordinary by discovering a letter from herself from 10 years into the future. That tells her to watch for a new transfer student.

Masamune-Kun’s Revenge is a romantic comedy anime series, which ran from 2012 to 2018 so far. The story took starts, and to take revenge on his tormentors, Masume works hard to improve himself and to become an incredibly handsome, albeit narcissistic high school student to return. So, that any attack comes in, he is prepared with an exact vengeance.

2nd last to suggest is the btooom. The series is of 2012 with the complete essence of thriller, drama, science, and fiction. It follows the adventure of Ryota who is unemployed but is the best player in the titular video game. And the story takes its twist when he met his lover of life in that game and got trapped in that gaming world. And hence, the plot made it a success.

Last but not least comes the final one ‘Koutetsujou no Kabaneri’ from 2016. On that note, Kebane who can only be killed by piercing their heart with an iron plate got emerged and kept the story rolling.

READ MORE: 15 Anime like  Spy X Family That You Must Watch

The show was released on 8 January 2016 and ended on 25 March 2016. This is the anime adaptation of a manga series of the same name. The characters in this included Fujinama Satoru who is voiced by Mitsushima Shinnosuke, Hinazuki Kayo voiced by Yuuki Aoi, Fujinama Sachiko voiced by Takayama Minami, and many more.

This 12-episode Japanese anime series was first aired on 7 January 2011 and finished on 22 April 2011. This is full of Drama and Suspense. The characters in this show are as follows: Akemi Homura, Kaname Madoka, Sakura Kyouko, Miki Sayaka, and Tomoe Mami. It is produced and directed by Iwakami Atsuhiro and Shinbou Akiyuki.

Yuri!!! on ICE was released on 6 October 2016 and lasted on 22 December 2016. If you have not watched this series yet, then you can watch it on Funimation. But before that know some of the main characters of the show here. The anime show includes Katsuki Yuuri, Nikiforov Victor, and Plisetsky Yuri.

Therefore, above mentioned are some of the recommended anime series to watch with the excitement of many more to add further to the list for sure!

This Japanese 12-episode series was first released on 11 July 2015 and finished on 26 September 2015. The series is directed and written by Tsutomu Mizushima and Michiko Yokote. The anime is an adaptation of the manga series that was published on 7 February 2011 and lasted on 25 December 2017 with 28 volumes in total. And finally, Yen Press is the responsible publishing house for publishing manga in the English language.

My Dress-Up Darling is also an adaptation of the Japanese manga series. The anime was released on 9 January 2022 and finished on 27 March 2022. And if we talk about its manga series, which came in 2018 on 19 January it was published for the first time. The anime will also come with its second season as soon as possible, as the makers of the show have already announced the sequel for the same. Obviously, the manga is doing well, so, definitely they have enough material to cover in the sequel.

Deadman Wonderland is an anime that started on 17 April 2011 and ended on 3 July 2011. It is an action, horror, and sci-fi show and obviously, this is an adaptation of a manga series. If you have not watched it yet, then you should watch it, only when you like to watch horror anime, you can binge-watch it on Crunchyroll.

READ MORE: 12 Anime Like Trigun You Should Binge-Watch Right Now!